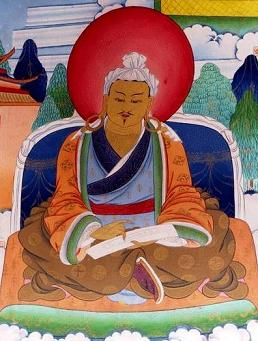 Whilst it is impossible to pinpoint the precise moment when Tibet’s spoken language first emerged, Tibetan tradition places the introduction of the written language during the reign of King Songtsen Gampo (c.617-698 CE). It is claimed that one of his ministers, who was named Thönmi Sambhota, was sent to India to learn the art of writing and later devised the Tibetan script, basing it on a northern form of the Indian Gupta alphabet, and wrote several texts outlining the rules of Tibetan grammar, of which only two survive today.

From contemporary documents, it would appear that the king was motivated initially by economic and diplomatic concerns, and we find the script used to write treaty documents that were then inscribed on pillars. Before too long however, the alphabet was put to use during the state-sponsored translation of Buddhist texts from Sanskrit, Chinese and several Central Asian languages, which began during the reign of King Trisong Detsen, and continued during the reign of King Tri Ralpachen (c. 877-896 CE), by whose decree the written language was codified.

The first mention of Thönmi Sambhota comes in the history (ཆོས་འབྱུང་, chos 'byung) of the great scholar Butön (1290-1364). He does not mention the names of the two texts attributed to him by the later tradition, but refers to him as the author of eight grammatical treatises (ཡི་གེ་དང་སྒྲའི་བསྟན་བཅོས་བརྒྱད་མཛད་དེ་, yi ge dang sgra’i bstan bcos brgyad mdzad de).

Butön mentions the mission to develop an alphabet and says this was entrusted to thon mi a nu’i bu, i.e. a son of Thönmi Anu. A few lines further on in his text, Butön speaks about a translator of Buddhist texts called Thonmi Sambhota, but does not indicate this is the same person.

The next source to mention Thönmi is the Blue Annals of Shyönnu Pal (1392-1481), written between 1476 and 1478, which gives a slightly more elaborate account, but basically the same as Butön.

There is no mention of Thönmi Sambhota in either the Chinese chronicles or the Tun-huang documents.

Spelling of his name varies even in the writings of the same author. For example, Butön gives Thön-mi in his history and then Thu-mi in his index to the Tengyur.

The Tibetan language scholar R. A. Miller believes the Sumchupa and Takjukpa were not the works of a single person, but were composed over time by different authors. The Takjukpa appears to have been written after the major reform of Buddhist translation language (སྐད་གསར་གཅད་, skad gsar gcad) and to have been written by a single author as a well-structured, uniform composition. Sumchupa is not uniform and sections of it (such as shlokas 8 and 13) refer to the old pre-reform language, it is claimed, whereas other sections such as the scholastic introduction and shlokas 24-29 are likely later additions. Some sections of the Sumchupa are closely related to or based directly upon sections of the སྒྲ་སྦྱོར་བམ་པོ་གཉིས་པ་, sgra sbyor bam po gnyis pa, which intriguingly makes no mention of Thönmi or the texts ascribed to him.

Thönmi is also mentioned in the The Clear Mirror: A Royal Geneaology (རྒྱལ་རབས་གསལ་བའི་མེ་ལོང་, rgyal rabs gsal ba’i me long) of Sakyapa Sönam Gyaltsen (1312-1375).

Legend has it that Thönmi Sambhota not only invented the Tibetan script and rules of grammar, but was also the first to translate Buddhist texts. He is credited with translating:

According to one source, he even translated the Prajñaparamita in 100,000 Verses.[1]

According to the catalog of the Narthang Kangyur, he also translated the The Ratnaketu Dharani.[2]