From Rigpa Wiki
(Redirected from Bodhnath)
Jump to: navigation, search 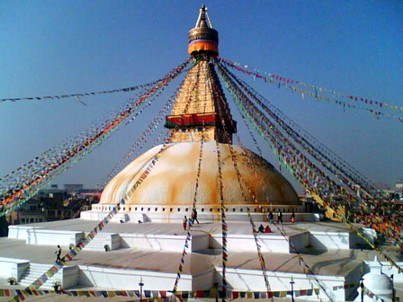 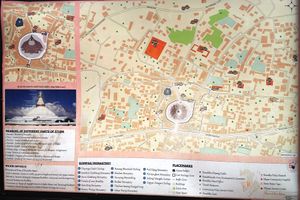 Information about the Stupa and its surroundings

Boudhanath — the largest stupa in Nepal and one of the largest stupas in the world. It is a focal point both for Buddhist pilgrimage and for daily devotion. Boudhanath is one of the three great stupas of Nepal, the other two being Swayambhunath and Namo Buddha. It is called Khasti, by Newars, Baudha or Boudhanath by Nepalis[1] and Jarung Khashor (Tib. བྱ་རུང་ཁ་ཤོར་, Wyl. bya rung kha shor),[2] or Lhundrup Tsek, the “All-Encompassing Stupa,”[3] by Tibetans.

The stupa itself is of a unique design, standing 36m high. The dome is constantly being whitewashed and adorned with saffron water in lotus-petal patterns, and around its base, are representations of the one hundred deities peaceful and wrathful deities. The dome stands on three levels of plinths in the shape of mandalas, and surrounding the entirety there is a low wall set with many Mani wheels and a khora path for circumambulation.

The Stupa lies on the ancient trade route from Tibet which enters the Kathmandu Valley in the northeast by the village of Sankhu, passes first the Boudhanath Stupa and the smaller stupa of Chabahil, also called “Little Boudnath” or Dhanya Stupa. The trade route then turns directly south, heading over the Bagmati river to Patan.[4] Once towering over a simple Tamang village and rice paddies, the stupa has been swallowed by the rapid growth of Kathmandu.

The history of the stupa called The Legend of the Great Stupa Jarungkashor[5] was revealed as a terma by Tertön Lhatsön Ngönmo. She re-hid the treasure at Samye monastery, to be re-discovered later by Ngakchang Shakya Zangpo in 1512 during a renovation of Samye.[6] Shakya Zangpo later travelled to Nepal and renovated both the Boudhanath and the Swayambhunath stupa and identified Lhundrup Tsek Charnel Ground.

In the Pema Kathang at the time of building Samye, Shantarakshita recounts the history of the Jarungkashor stupa as to encourage King Trisong Deutsen to invite Guru Rinpoche to Tibet.[7] Since, Shakya Zangpo’s terma provides a more detailed account, here, we are following his terma. Accordingly, the terma recounts, that when Guru Rinpoche was bestowing the Lama Yangsang Tukdrup[8] empowerments, King Trisong Detsen inspired to hear the full account, approached and requested Guru Rinpoche to share the history of the Jarungkashor stupa.

Guru Rinpoche then recounted that a local Tamang woman, a poultry farmer by the name of Samvari,[9] formed the aspiration to build a stupa that would house relics of the previous buddha Kashyapa. As the stupa’s foundation began to appear, members of the local community tried to intervene. They urged the king to take back his permission, saying that such a feat would embarrass the gentry. The ruler’s reply was definitive: “‘Let it be done’ (jarung) slipped from my tongue (kashor). The king speaks but once!” Thus the stupa became known as the Jarung Khashor.

With the help of her four sons, Samvari, enshrined the relics of the Buddha Kashhyapa in the central pillar and began building the stupa. However, she passed away before the stupa was finished, so it was left to her sons to continue the endeavor. Upon completion, all the Buddhas and bodhisattvas of past, present and future assembled and dissolved into the stupa. Therefore, it is also known as Lhundrub Tsek, “the all-encompassing stupa.” Due to this extraordinary blessing, the stupa became such a powerful object of worship, that every wish that is made in front of it will be fulfilled.

Then, the four brothers stood before the stupa and made the following aspiration prayers: The eldest brother aspired to become a king that will spread the dharma, the next eldest aspired to be be a preceptor of monks, the third aspired to be a powerful tantric yogi, and the youngest aspired to become a minister, who will coordinate the dharmic activities. In accord with their aspirations, in their next lives, the eldest brother was reborn as King Trisong Deutsen, the second as the abbot Shantarakshita, the third as Guru Rinpoche and the youngest as the minister, Ba Trisher, that is Nanam Dorje Dudjom. The insect that had been killed was reborn as Princess Pema Sal, the daughter of King Trisong Deutsen.

The Pema Kathang recounts, that Shantarakshita tells the story of the four brothers, who made these aspirations, to King Trisong Detsen. Shantarakshita thus tries to convince the slightly doubtful king, that, due to their previously made aspirations in front of this immensely powerful stupa, the establishment of the Dharma in Tibet was bound to happen.[10]

Thus, according to the terma, it is in front of this stupa that Guru Rinpoche made the aspiration, which led to his rebirth as one of the greatest tantric yogis. Therefore, this stupa represents one of the most powerful objects of worship. An entire chapter of the terma is dedicated to the immeasurable benefits that will arise from any wish, aspiration or contact we make with this stupa. Taking their noble aspirations as an example, Nyoshul Khen Rinpoche said, that we should make aspirations as vast as possible. Thus he advised, for example, that we should not just aspire to become learned, but rather aspire to become as learned as Nagarjuna and even more.[11] Sogyal Rinpoche adds that we should also pray that all our wrong or negative aspirations may not be fulfilled. Thus ensuring that only benefit for us and other will arise from whatever we aspire.[12] Lama Zopa Rinpoche has said, “It is so powerful that the wishes of anybody who makes prayers to the stupa are fulfilled. Especially when you see the stupa for the very first time, whatever you pray for, it will succeed. Even from the airplane; the first time you see it, you must do your best prayer.”[13]