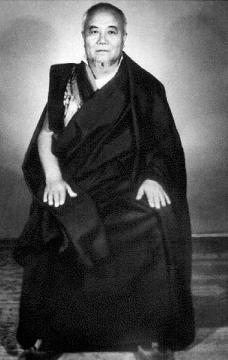 Polu Khenpo Dorje (Tib. སྤོ་ལུ་མཁན་པོ་རྡོ་རྗེ་, Wyl. spo lu mkhan po rdo rje) or Thupten Kunga Gyaltsen (ཐུབ་བསྟན་ཀུན་དགའ་རྒྱལ་མཚན་, thub bstan kun dga' rgyal mtshan) (c. 1896-1970) was one of the principal disciples of Khenpo Ngawang Palzang. He was regarded as one of the most accomplished Dzogchen masters of recent times. On account of his benefactors, the Bomta Tsang, one of the wealthiest families in Tibet, he is sometimes referred to as Bomta Khenpo (སྦོམ་མདའ་མཁན་པོ་, sbom mda' mkhan po).

He was born in the Polu valley of Derge region. His father was called Lhagyal. He entered Polu Monastery, where he learned to read and write, and studied with Gönchen Shar Lama Jamyang Khyenrap, a personal student of Mipham Rinpoche. He also studied with teachers at Palyul, Dzongsar, and other monasteries, and after a while he became the abbot of Polu Monastery.

He received empowerments and transmissions from Drubwang Pema Norbu and from Jamyang Khyentsé Chökyi Lodrö, and especially from his main teacher, Khenpo Ngawang Palzang.

He went to Central Tibet and meditated in the major power places of the central and southern provinces of Ü, Tsang, Dakpo, and Kongpo, especially in Samyé Chimpu and Kharchu in Lhodrak. He met the great scholar Vimalamitra in the guise of an Indian sadhu, who used a symbolic gesture to introduce him directly to the nature of his mind.

After the Chinese invasion, he went to India, where he gave teachings. He went on pilgrimage to the major holy sites in Bhutan, and at Bumthang had a vision of Longchenpa. He taught throughout Bhutan, and at the invitation of the queen grandmother of Bhutan, Puntsok Chödrön, he stayed at the mountain hermitage of Dechen Chöling.

At the age of seventy-four, on the 18th day of the ninth month of the Iron Dog year (1970), he passed away, sitting upright in the posture of mind in comfort and ease. Among Polu Khenpo's most important disciples were Taklung Tsetrul Rinpoche, Khenpo Kunga Lekpa, Dr. Trogawa Rinpoche and the third Zhingkyong Choktrul.