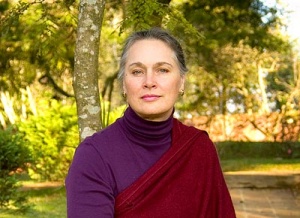 Born in the US, Lama Tsering has served Chagdud Tulku Rinpoche as his translator for more than 11 years. After completing a three year retreat in 1995, she was ordained as a lama and recognized by Chagdud Tulku Rinpoche as a holder of the Red Tara lineage, authorized to give teachings and empowerments. In the same year she was invited to teach in Brazil where she moved to shortly after.