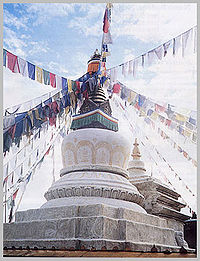 Namo Buddha or Takmo Lüjin (Wyl. stag mo lus sbyin) is an important Buddhist pilgrimage site of Nepal, and one of the three main stupas of the Kathmandu valley. Situated about 40 km to the south east of Kathmandu city, the stupa built on the bones and hair of prince Mahasattva (Tib. Semchen Chenpo), stands on the slopes of the Gandha Malla hill[1]. 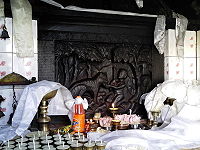 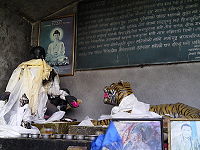 On the eastern side of the hill is the monastic complex built by Khenchen Thrangu Rinpoche—Thrangu Tashi Yangtse Monastery. 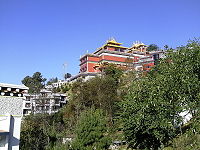