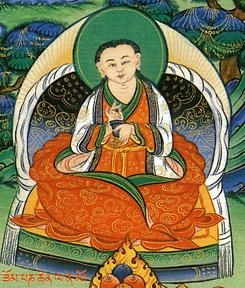 Rongzom Chökyi Zangpo (Skt. Dharmabhadra; Tib. རོང་ཟོམ་ཆོས་ཀྱི་བཟང་པོ་, Wyl. rong zom chos kyi bzang po) aka Rongzompa lived in the 11th century. His dates have been given as 1012-1088. He was born in Tsang rong and met Atisha in his youth. He mastered the teachings of both Nyingma and Sarma traditions. He translated many works on secret mantra, some of which are preserved in the Tengyur and some of which did not survive. Likewise, many of his original writings have sadly been lost, but among those which are still to be found today are his commentary on the Guhyagarbha Tantra, his introduction to Mahayana called Introduction to the Way of the Great Vehicle and his famous Establishing All Appearances as Divine. His commentary on the Guhyagarbha Tantra begins with the line: “The nature of the Three Jewels is the enlightened mind,” and so it became known as The Jewel Commentary.

As well as his remarkable scholarship, he also manifested many signs of his deep realization. The historian Gö Lotsawa said of him: “In this snowland of Tibet no scholar has appeared who has been his equal.” Atisha recognized Rongzom as an emanation of the Indian mahasiddha Krishnacharya.