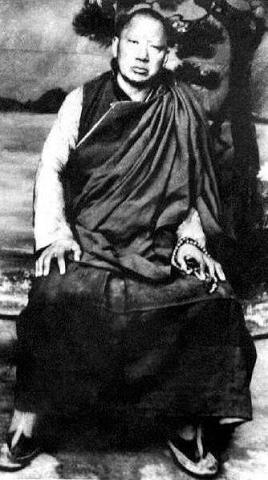 Shechen Kongtrul Pema Drimé Lekpé Lodrö (Tib. ཞེ་ཆེན་ཀོང་སྤྲུལ་པདྨ་དྲི་མེད་ལེགས་པའི་བློ་གྲོས་, Wyl. zhe chen kong sprul pad+ma dri med legs pa'i blo gros) (1901-c.1960) — the reincarnation of Jamgön Kongtrul Lodrö Thayé who resided at Shechen Monastery. He was recognized based on a dream vision in which the Fifth Shechen Rabjam Rinpoche saw the text of the 8,000 verse Prajnaparamita flying from Tsadra Rinchen Drak to the east of Dergé. He was also given the name Gyurme Kunzang Shenphen Thayé Lodrö Drimé by Shechen Gyaltsap. He might have died in Chinese captivity. He was one of the main teachers of Chögyam Trungpa Rinpoche and also of Khenpo Tsöndrü. He also gave Dzogchen teachings to Lama Sherap Dorje Rinpoche and Lama Tharchin Rinpoche.

Also at Shechen was a third great lama, Shechen Kongtrul Rinpoche. He lived on the other side of the mountain torrent from Gyaltsap Rinpoche's hermitage, on the flat top of another promontory in the mountainside a delightful place of meadows covered in summer with yellow flowers. Shechen Kongtrul was a great meditator and, like Shechen Gyaltsap, took no part in the monastery's administration, which was looked after by Shechen Rabjam.[1]