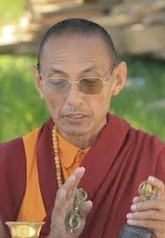 Tulku Rigdzin Pema Rinpoche (Tib. སྤྲུལ་སྐུ་རིག་འཛིན་པདྨ་རིན་པོ་ཆེ, Wyl. sprul sku rig 'dzin pad+ma rin po che) was born in 1948 in Gojo, a district in Kham, Eastern Tibet. At the age of three he was recognized by Adzom Gyalse Gyurme as an incarnation of Togden Sonam Wangchuk Rinpoche, an emanation of the Indian mahasiddha Puni. This recognition took place according to the instructions left by the previous Sonam Wanchuk Rinpoche related to his next birth.

After his enthronement at the Sangak Dargyeling Monastery in Kham, he studied sutra, tantra, and philosophy with several khenpos. His main teachers were Rago Choktrul, Dilgo Khyentse Rinpoche and Penor Rinpoche, from whom he received all the vajrayana empowerments and transmissions.

Since his escape from Tibet during the early eighties, he stayed mainly with Dilgo Khyentse Rinpoche at Shechen Monastery in Nepal, where he played an important role in the preparations and blessings of all the statues. He is an expert in making stupas, for which he completed the most important mantra recitations, and was responsible for the completion of a large number of stupas in Asia, Europe, and the United States.