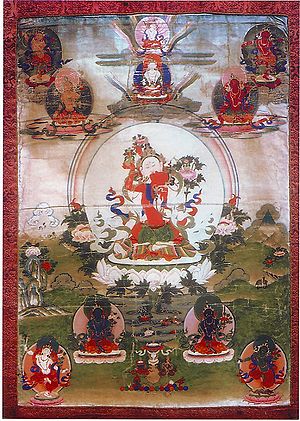 Chimé Pakmé Nyingtik (Tib. འཆི་མེད་འཕགས་མའི་སྙིང་ཐིག་, Wyl. ‘chi med ‘phags ma'i snying thig; Eng. 'The Heart Essence of the Sublime Lady of Immortality') is a long life practice revealed as mind terma by Jamyang Khyentsé Wangpo in 1855. The Chimé Phakmé Nyingtik is a practice that accomplishes the three deities of longevity. There are many practices that accomplish each of the three deities individually, but the Chimé Pakmé Nyingtik accomplishes all three deities together, which makes it a very special longevity practice. Another special feature of this sadhana is that the main deity is the female White Tara, in union with her consort, which is highly unusual.

Orgyen Tobgyal Rinpoche explains that the main reason for doing this practice is to spread the teachings of the Buddha far and wide and to promote the well-being and happiness of all sentient beings, and also so that the practitioners may be free from illness, live long lives and quickly attain enlightenment.[1] The Chimé Phakmé Nyingtik is widely considered the supreme practice to protect all the great holders of the teaching, and to lengthen their lives.

"Chimé Pakmé Nyingtik" is both the name of the sadhana that this page is about, and of the terma cycle that contains it. Besides the Chimé Phakmé Nyingtik sadhana, the terma contains the Vima Ladrup tantra and sadhanas of Amitayus and Ushnishavijaya.

White Tara was Jamyang Khyentse Wangpo’s main yidam. Just before dawn, one morning early in 1855 as he practicing her, Jamyang Khyentse Wangpo had a vision of White Tara, the Wish-Fulfilling Wheel. She appeared in the sky before him, and her ten-syllable mantra om tare tuttare ture soha resounded every- where. She then dissolved into him, and he became indivisible from Tara’s enlightened body, speech and mind; in that moment he had a profound experience of primordial wisdom. When he arose from that state Shri Singha, Vimalamitra and Guru Rinpoche, the three masters who had attained the vidyadhara level of power over life, appeared in front of him. Joyfully, they gave him an empowerment, then melted into light; and the moment they dissolved into him, his ordinary consciousness dissolved within the expanse of the dharmadhatu, and the combined blessings of the three great masters made it possible for the entire Chimé Pakmé Nyingtik—all the tantras, empowerments, pith instructions and sadhanas—to enter his wisdom mind as clearly and distinctly as a reflection in a mirror.

The following day Khyentse Wangpo began to transcribe the sadhana, with the help of Vimalamitra, who gave him repeated blessings and even checked the manuscript after Jamyang Khyentse Wangpo had written it. In Jamyang Khyentse Wangpo’s autobiography, he stated that he had not transcribed the entire Chimé Pakmé Nyingtik cycle. He transcribed only the root sadhana known as the Chimé Phakmé Nyingtik, the sadhana and instruction cycle of the lama known as Vima Ladrup (The Sadhana of Vimalamitra) and that of White Amitayus and Ushnisha Vijaya.

For five years Jamyang Khyentse Wangpo practised these teachings in complete secrecy. Tertöns are often instructed to keep termas secret for several years before transmitting them to the prophesied recipients. Then at Dokhoma near the Derge capital, he gave the empowerment and teachings of the Chimé Pakmé Nyingtik to Chokgyur Dechen Lingpa. Jamyang Khyentse Wangpo then gave it to the 14th Karmapa, Thekchok Dorje. He also gave it to Jamgön Kongtrul Rinpoche, who was then instrumental in spreading the Chimé Pakmé Nyingtik teachings. He compiled thirteen of the cycle’s twenty-seven texts based on the original terma, such as Ushnisha Vijaya practice, lineage prayer, short tsok, fire offering and the Retreat Manual.

Later, Jamyang Khyentse Wangpo transmitted these teachings to other students, such as Tertön Sogyal, Shechen Gyaltsab Pema Namgyal, Karmapa Khakhyap Dorje, Dodrupchen Jikme Tenpe Nyima and Kathok Situ Chökyi Gyatso, among many others, all of whom took it as one of their main practices.

Kathok Situ gave the empowerments and instructions to Jamyang Khyentse Chökyi Lodrö. It was such an important practice for Chökyi Lodrö that his biography tells us that he went to receive the empowerment ten times. It was also the main heart practice of Dudjom Rinpoche and Dilgo Khyentse Rinpoche, who completed all the required practices seven times in retreat. More recently, one of the main holders of this practice was Kyabjé Trulshik Rinpoche, who every year spent at least a month in retreat practising Chimé Pakmé Nyingtik at Maratika cave in Nepal, the place where Guru Rinpoche accomplished the level of a vidyadhara with power over life. It is also the heart practice of His Holiness Sakya Gongma Trichen Rinpoche.

Through its power and blessings, many masters, including the great Jamgön Kongtrul, have been able to remove obstacles. In fact, according to prophecies, the life of Jamgön Kongtrul would have had many obstacles, and he would not have lived very long, but for this practice of Chimé Pakmé Nyingtik.

The 27 Tibetan texts of the cycle can be consulted on Rinchen Terdzö website here.

The empowerment has been given to the Rigpa Sangha on many occasions: