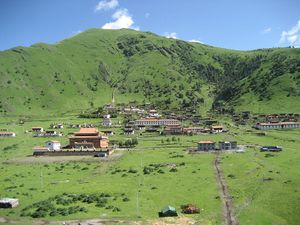 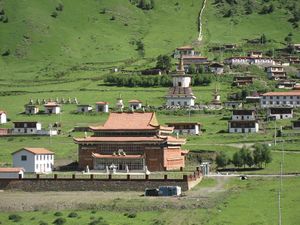 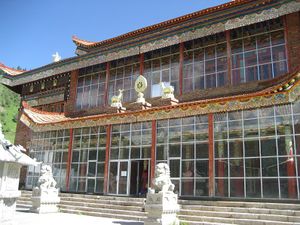 Jikme Trinle Özer had first laid the foundation for a monastery called Drodön Lhündrub Gompa at Shukchen Tago, about ten miles from the present Dodrupchen monastery, but then left for other matters. He resumed building in 1799, where he was assisted by Jikme Gyalwe Nyugu. Later on, Jikme Trinle Özer refused to stay there because of some incident with the local chieftain. It remained a hermitage for some time and Patrul Rinpoche still stayed there. But Tulku Thondup says that when he passed by the monastery as a child, he saw only ruins.[2]

Then in 1810 the First Dodrupchen established another meditation centre at Yarlung in Serta. He named it the Pemako Tsasum Khandro Ling (pad+ma bkod rtsa gsum mkha' 'gro'i gling), which became known as Yarlung Pemako Monastery. After building it Dodrupchen Rinpoche vowed never to leave it again and stayed there for next ten years of his live.[4] Many great masters came to receive transmissions from Dodrupchen here, and it is here where Gyalsé Shenpen Tayé instituted an annual forty-five day teaching and practice of the Guhyagarbha Tantra.

When Gönpo Namgyal, a warlord of Nyarong, attacked the Ser valley, the Second Dodrupchen Jikmé Puntsok Jungné had no choice but to flee the monastery. He then settled in 1862 in the Tsangchen plain in the upper Do Valley, and this became the location of the current Dodrupchen Monastery.

In its heyday, the monastery had a group of great scholars who came to be renowned as the 'Four Great Khenpos'.[5]. They were:

Tulku Thondup writes: 'Almost all the scholars of that time in Golok and Serta provinces of Tibet and also many from Nyingma monasteries of Kham, Gyarong, and Amdo were students of Dodrupchen Monastery'