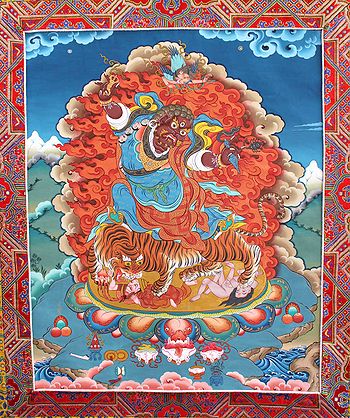 Dorje Drolö, according to the Dudjom Tersar lineage

"The wrathful practice of Dorje Drolö is critically important in pacifying all the negative circumstances that we face in today's world. Since the whole spectrum of Buddhadharma teachings and its essence is love, compassion, and wisdom, this wrathful practice is not just the expression of some sort of ordinary rage; rather, it is the pinnacle practice of compassion and wisdom underlying the practice of Buddhadharma at its most profound level. Therefore, for the sake of all sentient beings, particularly in this degenerate time, the Dudjom Traktung Pema Sokdrub Zabmo “The Vital Essence Sadhana of Dudjom Traktung Pema” practice is a very powerful and immediately effective way of bringing peace and harmony to the world.”

“[In 1917], when I, Jigdral Yeshe Dorje, was thirteen years old, I was practicing somewhat the phases of approach and accomplishment of Duddul Ter Jyön Drolö [5] when the creation phase and the mantra recitation for this [Dudjom Traktung Pema Sokdrub Zabmo] suddenly arose in my mind, with its unique system of recitation and visualization. Later on, [in 1928], when I was twenty-four years old, and practicing the approach and accomplishment phases of Dudjom Drolö [6], this sadhana [of the Dudjom Traktung Pema Sokdrub Zabmo] arose very clearly.”

According to Bhakha Tulku Rinpoche:

After its first revelation, Dudjom Rinpoche kept secret the Dudjom Traktung Pema Sokdrub Zabmo during 37 years, as he himself wrote[7]:

"At that time, I was afraid on account of the sacred pledge that if I showed the sadhana to anyone, my life-force would be severed. Therefore, I practised it secretly while outwardly I practiced the two above-mentioned sadhanas. [8]. It became clear to me that when the obstacles of the Dark Age would surge like strong winds, only the power of this instruction would allow my life-force to be maintained, and then only like a butter lamp. I had great confidence in the power of this new terma. Now, [in 1954], I have crossed the difficult passageway of fifty-years ad Gyurme Yönten Gyatso, who is an excellent mantra-practitioner, has implored me earnestly and fervently, to reveal at all costs, the profound secret sadhana od Dudjom Dorje. Therefore, I released the secret seal and revealed this teaching”.

According to Shenphen Dawa Rinpoche[9]:

”The Dudjom Dorje Drolö wang is a serious, practice-oriented empowerment meant for those who are committed and feel connected to Dorje Drolö. Only those who have Refuge Vows and a previous empowerment from a Vajra Master are welcome to attend this kind of empowerment. Dorje Drolö is one of the most powerful of wrathful emanations of Guru Rinpoche. In the Nyingma tradition, this practice is only given as the final accomplishment practice of the secret Vajrayana. The results for those who undertake a Dorje Drolö retreat are immediate and final and those who do so will understand the strictness of his command. Most of the time, one comes out of the retreat either, blessed, realized or mentally unbalanced. It is advised to be really cautious both in receiving the Wang from a qualified master of the lineage, and in practicing Dorje Drolö.”

According to Sogyal Rinpoche[10]: