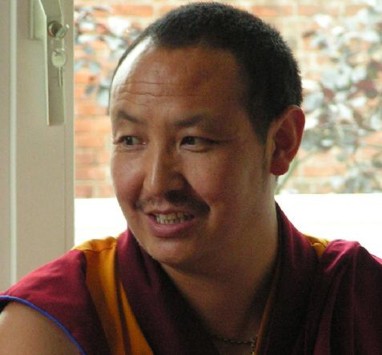 Khenpo Puntsok Namgyal (b. 1965) learned to read and write when he was seven years old. He was ordained when he was fourteen and studied with Khenpo Pema Damchok. In 1983 he began studying the Five Major Basic Texts. In 1986, he took up monastic vows and became one of the first students at the Dzongsar Kham-jé Buddhist Institute after the reconstruction of Dzongsar Monastery. He studied all the teachings and traditions of sutra and tantra, and qualified as a khenpo at 23, completing the traditional three year retreat soon afterwards. Between 1992 and 1999, he taught at the Institute and in 2000 he became its abbot. Dzongsar Khyentse Rinpoche believes that he will become one of the most influential rimé masters of our times.

In recent years Khenpo has been invited to teach at five other monasteries or Buddhist academies, including the class for reincarnated lamas at the Highest Buddhist Academy in Beijing. In 2005, he was invited to be the examiner and supervising professor for the Doctoral Class on Buddhist Studies for all of China. He is currently the head of the Dzongsar Kham-jé Insitute and the Vice Director of the Dzongsar Monastery Management Committee.

Khenpo visited the USA in January 2007 at the invitation of the University of Virginia.