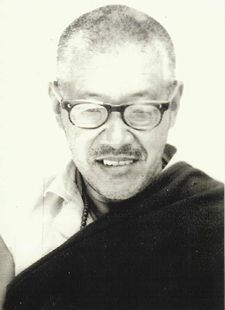 Khenpo Rinchen aka Khenpo Triso Rinchen (Tib. མཁན་པོ་ཁྲི་སོ་རིན་ཆེན་, Wyl. mkhan po khri so rin chen) (1926-1985) — born in eastern Tibet, he studied at Dzongsar monastery, where, it is said, he would read night and day, even by the light of a butter lamp or a stick of incense. After fleeing into exile in India, he became the teacher of H.H. Sakya Trizin and served as the main Sakya khenpo at the Tibetan Institute in Sarnath, as well as head khenpo at the Sakya monastery in Puruwala. He also taught for three years at the shedra in Namdroling Monastery. His students include Dzigar Kongtrul Rinpoche, Chökyi Nyima Rinpoche and Khenpo Namdrol.

During the Kalachakra empowerment in Bodhgaya in 1974, he was praised by H.H. the Dalai Lama as a teacher who had mastered the scholarship of all four schools of Tibetan Buddhism. His Holiness also spoke of Khenpo Rinchen at Lerab Ling in 2000: “I think there are hardly any teachers, Gelug, Nyingma, Kagyü, or Sakya, who know the teachings of all the other schools. From my own experience, I can say that the late Khenpo Rinchen was one who did: he really was an excellent master.”