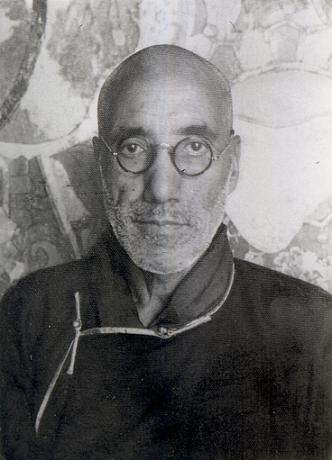 Khunu Lama Tenzin Gyaltsen (Tib. ཁུ་ནུ་བླ་མ་བསྟན་འཛིན་རྒྱལ་མཚན་, Wyl. khu nu bla ma bstan 'dzin rgyal mtshan) (1895-1977) — a teacher of His Holiness the Dalai Lama, especially for the Bodhicharyavatara, for which he held Patrul Rinpoche’s lineage, having received it from one of the great khenpos at Dzogchen monastery.

Khunu Lama was born in 1895 in a small village called Sumnam in the Kinnaur Valley in modern day Himachal Pradesh. His father's family was Nyingma and his mother's was Drukpa Kagyü. As a young boy he was sent to his mother's family, where he began his studies under his maternal uncle, Rasvir Das. He went on to study with Sonam Gyaltsen, a student of Tokden Shakya Shri.

In 1913, he went to Gangtok, where he met the great literary scholar and grammarian Orgyen Tendzin Rinpoche (1863-1936), who had travelled in Tibet and spent time at Tsurpu Monastery. Khunu Lama spent three years studying Sanskrit grammar with Orgyen Tendzin in Rumtek. He then went to Tashilhunpo Monastery in Shigatse, where he continues his studies of grammar and poetry and also began his serious study of buddhist philosophy. After three years there, he went to Lhasa where he studied further and also taught literary sciences at the famous Medical and Astrological centre and was a tutor to several noble families. At Drikung Til, he studied with the accomplished Drikung master Drubwang Amgön Rinpoche. He also studied Mahamudra at a Drukpa Kagyü centre called Khamda, and he studied at the three main Gelugpa monasteries of Drepung, Sera and Ganden.

At the request of the Sixth Panchen Lama, Chökyi Nyima (1883-1937), he returned to Tashilhunpo and taught there at the school for prospective civil servants. It was there that he met Katok Situ Chökyi Gyatso, who was on pilgrimage in Central Tibet.

In the early 1920s, Khunu Lama travelled to Kham, where he stayed for approximately fourteen years. During this time he studied with Katok Situ Chökyi Gyatso, Jamyang Khyentse Chökyi Lodrö, Khenpo Shenga, Khenpo Kunpal, Khenpo Jamyang Gyaltsen, and many other masters from all schools. He also taught Sanskrit to Dilgo Khyentse Rinpoche and Dezhung Rinpoche.

Eventually he did return to India, where he lived as a true ascetic. When my master and I came to India on pilgrimage after leaving Tibet, we searched for him everywhere in Benares. Finally we found him staying in a Hindu temple. No one knew who he was, or even that he was a Buddhist, let alone that he was a master. They knew him as a gentle, saintly yogin, and they offered him food. Whenever I think of him, I always say to myself, "This is what St. Francis of Assisi must have been like."