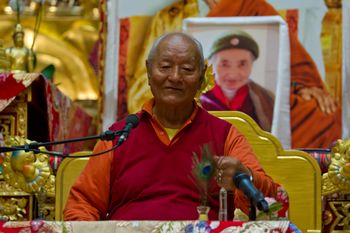 Chögyal Namkhai Norbu Rinpoche (Tib. ཆོས་རྒྱལ་ནམ་མཁའི་ནུར་བུ་, Wyl. chos rgyal nam mkha'i nor bu) (1938-2018) was one of the foremost Dzogchen masters of recent times. He was born in Derge, Kham (Eastern Tibet) on 8 December 1938[1]. At the age of two he was recognized as the reincarnation of the Dzogchen master Adzom Drukpa by Palyul Karma Yangsi and Shechen Rabjam. When he was three years old, the 16th Gyalwang Karmapa recognized him as the mind emanation of another well known teacher, Drug Shabdrung Rinpoche also known as Ngawang Namgyal, who was the first Dharmaraja of Bhutan and an incarnation of Pema Karpo.

Namkhai Norbu Rinpoche passed away on the 27th of September 2018 in Arcidosso, Italy.