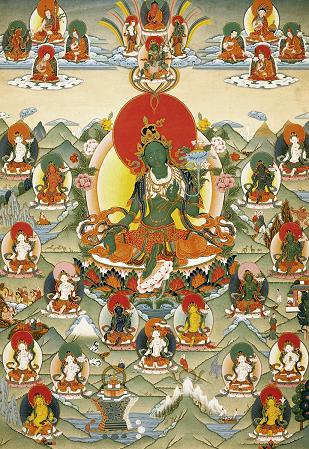 The Origin of Tara

Sogyal Rinpoche writes in The Tibetan Book of Living and Dying:

In his infinite compassion, [Avalokiteshvara] vowed [...] to liberate all sentient beings from the sufferings of the different realms of samsara. Before the buddhas of the ten directions, he prayed: "May I help all beings, and if ever I tire in this great work, may my body be shattered into a thousand pieces." First, it is said, he descended into the hell realms, ascending gradually through the world of hungry ghosts, up to the realm of the gods. From there he happened to look down and saw, aghast, that though he had saved innumerable beings from hell, countless more were pouring in. This plunged him into the profoundest grief; for a moment he almost lost faith in that noble vow he had taken, and his body exploded into a thousand pieces. In his desperation, he called out to all the buddhas for help, who came to his aid from all directions of the universe, as one text said, like a soft blizzard of snowflakes. With their great power the buddhas made him whole again, and from then on Avalokiteshvara had eleven heads, and a thousand arms, and on each palm of each hand was an eye, signifying that union of wisdom and skillful means that is the mark of true compassion. In this form he was even more resplendent and empowered than before to help all beings, and his compassion grew even more intense as again and again he repeated this vow before the buddhas: "May I not attain final buddhahood before all sentient beings attain enlightenment."

It is said that in his sorrow at the pain of samsara, two tears fell from his eyes: through the blessings of the buddhas, they were transformed into the two Taras. One is Tara in her green form, who is the active force of compassion, and the other is Tara in her white form, who is compassion's motherly aspect. The name Tara means "she who liberates": she who ferries us across the ocean of samsara.[1]

The earliest textual reference of Tara is the Manjushri mula kalpa, which arose between the 5th and 8th century, where Tara is mentioned in some of the mandalas. The following texts are found in the Tibetan Kangyur.

According to Jetsün Kushok Chimey Luding, Tara sadhanas are Kriya Tantra practices or originate from Kriya Tantra. Some, such as the Praise to the Twenty-One Taras only involve a front visualisation, while others, for example the Chimé Pakmé Nyingtik also have self-visualisation. Whichever is the case, it is important to observe Kriya Tantra practice requirements of purity through cleanliness, avoiding eating meat and so on. That is why, Jetsun Kushok adds, Tara practices, and especially Mañjushri practices, are best done in the morning before you have eaten any meat.