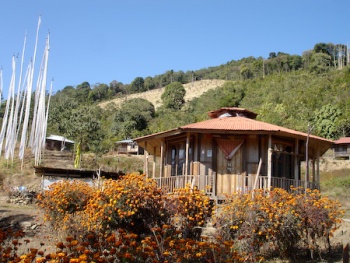 Thekchok Ösel Chöling is a nyingma retreat place in Lower Pemakö, now in the northern part of India, founded by Togden Kunzang Longrol.[1] It follows the Dudjom Tersar lineage and is a main retreat place of Deden Tashi Chöling.

The landscape around Thekchok Osel Chöling is very spacious and offers a complete panoramic view. The front view is of Dewakota, a supremely holy place only a few miles away, and which embodies the blessings of all the holy sites of lower Pemakö and the location where Dudjom Rinpoche bestowed the Rinchen Terdzö empowerments for the first time in his life.

It is said in the traditional accounts that:

"In front, the unceasing river of blessing flows from three holy sites. With the smile of mountains and valleys around which graces the land, it is a significant place where samadhi spontaneously arises and always flourishes”. 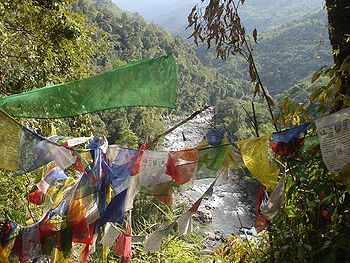 In 1959, when Togden Kunzang Longrol relocated himself from Yang Gon Cho Khor Ling in Upper Pemakö to Lower Pemakö in northern India, he was accompanied by many of his disciples from Powo, Tibet. After a brief search for a suitable environment to continue his practice, Togden Kunzang Longrol settled on the land which became known as Thekchok Osel Chöling. Togden Kunzang Longrol's main students–Lama Tshering Chodrag, Lama Tashi Gyaltsen, Lama Dolma Tsering and others–used to lead various annual and monthly practices on the land. It is said that whenever a drupchen was performed, numerous auspicious signs would appear.

Among the teachers invited on the land by Togden Kunzang Longrol are:

Phulung Sangye Rinpoche, Terton Chöjé Lingpa and Togden Kunzang Longrol were very closed and would often do meditation retreats together in Thekchok Osel Chöling. On this retreat land, there is a small creek with a water source which is said to have been revealed by these three masters together as as the water source for the retreat land.

Tulku Orgyen Phuntsok, who has been recognized as the incarnation of Togden Kunzang Longrol, now oversees Thekchok Osel Chöling. On the upper part of the land, there is now a small temple with a complete set of facilities for sadhana practice. Surrounding this, there are cabins which have been used by three-year retreatants and also by many short-term retreatants.