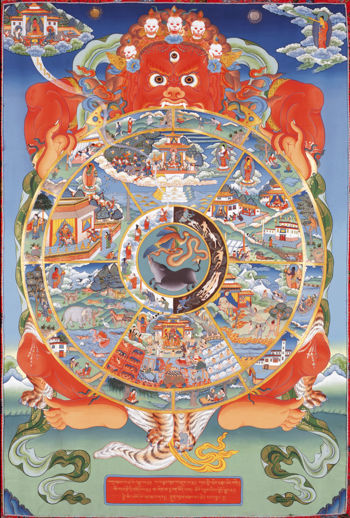 The Wheel of Life

The Wheel of Life is a traditional representation of the samsaric cycle of existence.

The diagram, said to be designed by Buddha himself, depicts an inner psychological cosmology that has had great influence throughout Asia. It is much like a map of the world or the periodic table of elements, but it is a map of an internal process and its external effects.[1]

It’s quite a popular painting that you can see in front of almost every Buddhist monastery. In fact, some Buddhist scholars believe that the painting existed prior to Buddha’s statues. This is probably the first ever Buddhist symbol that existed...

One of the reasons why the Wheel of Life was painted outside the monasteries and on the walls (and was really encouraged even by the Buddha himself) is to teach this very profound Buddhist philosophy of life and perception to more simple-minded farmers or cowherds. So these images on the Wheel of Life are just to communicate to the general audience.[2]

A Brief Explanation of the Diagram

The meanings of the main parts of the diagram are:

Symbolically [the inner] three circles, moving from the centre outward, show that the three afflictive emotions[3] of desire, hatred, and ignorance give rise to virtuous and non-virtuous actions, which in turn give rise to levels of suffering in cyclic existence. The outer rim symbolizing the twelve links of dependent arising indicates how the sources of suffering—actions and afflictive emotions—produce lives within cyclic existence. The fierce being holding the wheel symbolizes impermanence...

The moon [at the top] indicates liberation. The Buddha on the left is pointing to the moon, indicating that liberation that causes one to cross the ocean of suffering of cyclic existence should be actualized.[4]

A Detailed Explanation of the Diagram

Centre of the Wheel: The Three Poisons 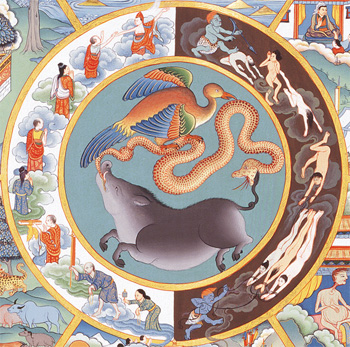 The centre of the Wheel of Life, featuring a pig, snake and bird representing ignorance, anger and desire

Tibetans have a traditional painting called the Wheel of Life, which depicts the samsaric cycle of existence. In the centre of this wheel are three animals: a pig, a snake, and a bird. They represent the three poisons. The pig stands for ignorance, although a pig is not necessarily more stupid than other animals. The comparison is based on the Indian concept of a pig being the most foolish of animals, since it always sleeps in the dirtiest places and eats whatever comes to its mouth. Similarly, the snake is identified with anger because it will be aroused and leap up at the slightest touch. The bird represents desire and clinging. In Western publications it is frequently referred to as a cock, but this is not exactly accurate. This particular bird does not exist in Western countries, as far as I know. It is used as a symbol because it is very attached to its partner. These three animals represent the three main mental poisons, which are the core of the Wheel of Life. Stirred by these, the whole cycle of existence evolves. Without them, there is no samsara.[5]

The images in this layer vary in different paintings of the wheel. In the image shown here, the two half circles represent positive and negative actions, or karma, that are motivated by the three poisons of ignorance, attachment/desire and aversion/anger.

The third layer of the wheel depicts the six realms of samsara.

The fourth layer of the wheel depicts the twelve links of interdependent origination.

The Monster Holding the Wheel: Impermanence

The wheel in the centre of the painting is in the grasp of a frightful monster. This signifies that the entire process of cyclic existence is caught within transience. Everything in our type of life is characterized by impermanence. Whatever is built will fall down, whatever and whoever come together will fall apart.[6]

The fierce being holding the wheel symbolizes impermanence, which is why the being is a wrathful monster, though there is no need for it to be drawn with ornaments and so forth... Once I had such a painting drawn with a skeleton rather than a monster, in order to symbolize impermanence more clearly.[7]

Reflecting on impermanence can start us on the path towards liberation.

The Western poet Rainer Maria Rilke has said that our deepest fears are like dragons guarding our deepest treasure. The fear that impermanence awakens in us, that nothing is real and nothing lasts, is, we come to discover, our greatest friend because it drives us to ask: If everything dies and changes, then what is really true? Is there something behind the appearances, something boundless and infinitely spacious, something in which the dance of change and impermanence takes place? Is there something in fact we can depend on, that does survive what we call death?

Allowing these questions to occupy us urgently, and reflecting on them, we slowly find ourselves making a profound shift in the way we view everything. With continued contemplation and practice in letting go, we come to uncover in ourselves "something" we cannot name or describe or conceptualize, "something" that we begin to realize lies behind all the changes and deaths of the world.[8]

The Buddha and the Moon: Liberation from Suffering

At the top right of the painting as we face it, the Buddha is standing with his left hand in a teaching pose and with the index finger of the right hand pointing to a moon... The moon symbolizes liberation. Buddha is pointing out that freedom from pain is possible... The intent of the painting is not to communicate mere knowledge of a process but to put this knowledge to use in redirecting and uplifting our lives.[9]

The Buddha showed the gradual way toward the cessation of suffering by means of the Noble Eightfold Path. Again, this is a very basic teaching, yet it is not just a preliminary one. When examined deeply, it proves to cover the whole journey... The entire teaching of the Buddha is included in this path, which provides the basic guideline on how to work with and overcome the sources of suffering.[10]

All the spiritual teachers of humanity have told us the same thing, that the purpose of life on earth is to achieve union with our fundamental, enlightened nature... There is only one way to do this, and that is to undertake the spiritual journey, with all the ardor and intelligence, courage and resolve for transformation that we can muster.[11]