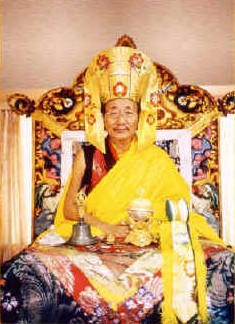 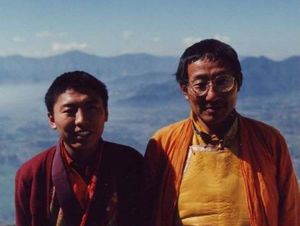 Trulshik Adeu Rinpoche (Tib. འཁྲུལ་ཞིག་ཨ་ལྡེའུ་, Wyl. ‘khrul zhig a lde’u) also known as Druprik Khyuchok or Drupchok Rinpoche (1931-2007) — an important Drukpa Kagyü teacher from Tsechu Monastery, Nangchen. Like Tulku Urgyen Rinpoche, he was a disciple of Samten Gyatso (1881-1945/6). He was the main teacher of Tsoknyi Rinpoche.

The Eighth Adeu Rinpoche was born on the fourth day of the 12th Tibetan month in the Iron Horse year of the fifteenth calendrical cycle, in the middle of a freezing winter. As the 16th Karmapa and the Eighth Choegon Rinpoche recognized the child as the authentic reincarnation of the Seventh Adeu Rinpoche, he was taken to Tsechu Gompa for enthronement at the age of seven. Immediately after this, he began his traditional education in writing, calligraphy, poetry, astrology, mandala painting, spiritual practice and text recitation. At the same time, the young Adeu Rinpoche also received many teachings and pith-instructions based on the old and new traditions, but primarily on the Drukpa lineage from the Eighth Choegon Rinpoche, Jamyang Khyentse Chökyi Lodrö and many other great masters. After this, Rinpoche entered into a seven-year retreat, during which he practised the sadhanas of different deities and trained in tsa-lung, following the Six Yogas of Naropa and the liberating Mahamudra mind-training practices. He also learnt philosophy. Adeu Rinpoche later wrote a precise commentary on the three sets of vows, the root of heart-essence of Nyingmapa lineage, and on the various mandala deities.

In 1958, all the sacred texts, statues and precious objects were completely destroyed, and Rinpoche was imprisoned for fifteen years. Although Adeu Rinpoche suffered a great deal, the period in prison gave him an opportunity to meet many accomplished masters, who had also been imprisoned, especially Khenpo Munsel from whom he received instructions on Dzogchen, and under whose guidance, he practised the rare and precious teachings of the aural lineage (Nyengyü) of the Nyingma school, and studied the various Nyingmapa terma teachings.

At the end of 1980, Adeu Rinpoche went to Tashi Jong in India to pass on the entire lineage of the Khampa Drukpa tradition to the present Khamtrul Rinpoche Dongyü Nyima, Choegon Rinpoche Choekyi Wangchuk and many other great tulkus of the Drukpa lineage.

Adeu Rinpoche also took responsibility for restoring Tsechu Gompa, and at the same time collecting, correcting and editing all the Drukpa teachings, tantras and practices.

His reincarnation has recently been identified, in Tibet, by Choegon Rinpoche Chökyi Senge.