From Rigpa Wiki
Revision as of 22:39, 15 October 2022 by James V (talk | contribs) (In consultation with Khenpo Yeshi, the tibetan cannot be abbreviated as in the text that was removed. The second entry is the only correct one.)
(diff) ← Older revision | Latest revision (diff) | Newer revision → (diff)
Jump to: navigation, search 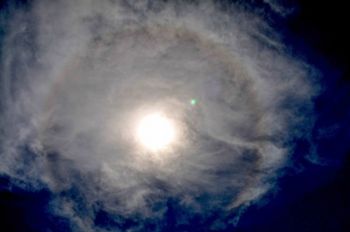 The sun covered by clouds, a common metaphor for buddha nature temporarily veiled by the obscurations

Buddha nature (Tib. ཁམས་ / རིགས་, kham / rig, Wyl. khams/rigs) [lit. element/family or lineage] — when the Buddha became enlightened he realized that all beings without exception have the same nature and potential for enlightenment, and this is known as buddha nature.

It is because this ground or sugatagarbha or potential is common to all beings that they are capable of attaining enlightenment. If they did not have such a ground then they could never become buddhas.

For example: a stone doesn’t have the ‘ground’ or potential to produce oil, and so no matter how much you might press it and grind it—even if you use modern tools and machinery—you will never extract any oil. A sesame seed, on the other hand, does have the potential to produce oil, and by pressing it in the right way, sesame oil can and will be produced. So it is because the potential exists as part of our basic nature that we can become buddhas.

When we say Buddha, we naturally think of the Indian prince Gautama Siddhartha who reached enlightenment... Buddha, however, has a much deeper meaning. It means a person, any person, who has completely awakened from ignorance and opened to his or her vast potential of wisdom[1]. A buddha is one who has brought a final end to suffering and frustration, and discovered a lasting and deathless happiness and peace.

But for many of us in this skeptical age, this state may seem like a fantasy or a dream, or an achievement far beyond our reach. It is important to remember always that Buddha was a human being, like you or me. He never claimed divinity, he merely knew he had the buddha nature, the seed of enlightenment, and that everyone else did too.

The buddha nature is simply the birthright of every sentient being, and I always say, “Our buddha nature is as good as any buddha’s buddha nature.” This is the good news that the Buddha brought us from his enlightenment in Bodhgaya, and which many people find so inspiring. His message—that enlightenment is within the reach of all—holds out tremendous hope. Through practice, we too can all become awakened. If this were not true, countless individuals down to the present day would not have become enlightened.[2]

How Do We Know That We Have Buddha Nature?

But what is a buddha? Briefly, a buddha is one who has developed his or her compassion (Tib. tsé) and wisdom (Tib. khyen) to the ultimate level, beyond all limits. Wisdom, in this context, refers not to an accumulation of knowledge but to the ability to see the true nature of things. what characterizes a buddha therefore is wisdom and compassion.

According to Buddhism, there is no being, human or otherwise, who doesn't possess some wisdom and some compassion. However bad, however evil, every being has a minimal amount of love, kindness, or compassion, at least for themselves or for one other being.

The usual term for ‘buddha nature’ in the Mahayana teachings is tathagatagarbha, but in the Vajrayana the term is sugatagarbha.

In his Khenjuk, Mipham Rinpoche writes:

The 'naturally present potential' (Skt. prakṛtistha-gotra; Wyl. rang bzhin gnas rigs) is the essence of the tathagatas. In essence, it is naturally arising and uncompounded wisdom, the union of awareness and emptiness, the dharmadhatu which has always been inseparable from the kayas and wisdoms. It is naturally pure, the nature of things, just as it is, pervading all phenomena, beyond any transition or change, like space. Although it is within this context that the ordinary aggregates, elements and faculties of beings are born and die, this nature itself remains beyond birth and death. It is through the realization of this nature that the Three Jewels come into being. This immaculate 'element' (Wyl. khams) is present in all beings without exception as the very nature of their minds, just like the example of a treasure beneath the earth and so on. Nevertheless, for those in whom this nature remains veiled by the four stains, and who have not activated their potential, despite its presence, it does not function in an apparent way [rather like a candle kept inside a jar]. And although they are naturally pure, because they are obscured by temporary veils, this nature is beyond most people's imagination. If the veils that obscure the potential are reduced, it serves to inspire us with a longing to leave samsara behind and attain nirvana.

The four veils that obscure our potential are (1) an antipathy to the Mahayana teachings, (2) the view of self, (3) fear for the sufferings of samsara, and (4) a lack of concern for beings' welfare.

The causes for purifying these veils are: (1) an interest in the Mahayana teachings, (2) a high degree of wisdom, (3) meditative concentration (samadhi), and (4) love.

When we possess these four, through the force of awakening our potential, we come to possess the 'developing potential' (Skt. samudānīta-gotra; Wyl. rgyas 'gyur gyi rigs) through which we can properly cultivate the virtues of the Mahayana.