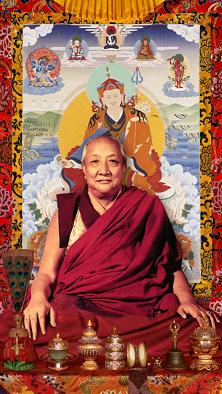 He was one of the last great masters to have completed his entire training in Tibet. He entered Shechen Monastery in Kham, east Tibet, at the age of eleven and there his principal master, Shechen Gyaltsap Gyurme Pema Namgyal, formally enthroned him as an incarnation of the wisdom mind of the first Khyentse Rinpoche, Jamyang Khyentse Wangpo (1820-1892). ‘Khyentse’ combines two Tibetan words: khyen, meaning wisdom, and tse, meaning compassion.