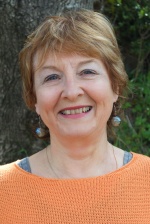 Dominique Side encountered Tibetan Buddhism in the mid-1970s in London. She has studied with Sogyal Rinpoche and Dzongsar Khyentse Rinpoche in particular, and over the years held a number of leadership roles in Rigpa UK and in Lerab Ling, Rigpa’s retreat centre in southern France.

She has completed several strict retreats and has also obtained a PhD in Madhyamaka philosophy from Bristol University, UK. She taught Buddhism in London schools for eight years and has written textbooks on the subject. Under the guidance of Dzongsar Khyentse she initiated the Milinda training programme for Dharma teachers in 2017, and she also served as vice-president of the European Buddhist Union for five years. As a Senior Teacher in Rigpa, she specializes in making Buddhist thought and philosophy accessible to all.

Since the Stockholm Conference in 1972, Dominique has been concerned by environmental issues and for 15 years worked professionally as a writer and editor on the interface between environment and economic development.