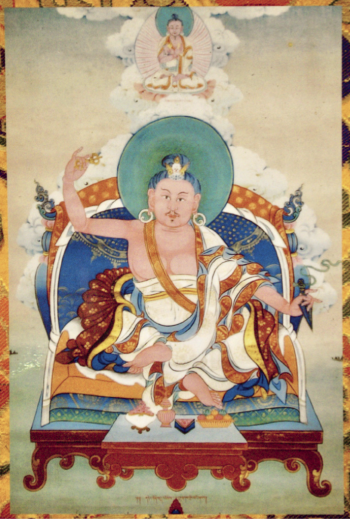 Dudjom Drakngak Lingpa (Wyl. bdud 'joms drag ngas gling pa) (1871-1929) was a tertön from Kham who, in the early 20th century, moved to Pemakö and revealed several secret places of this hidden land. There, in 1922, he invited Dudjom Rinpoche (then aged 18) to grant—for the first time—the empowerments of the Rinchen Terdzö, in Dewakota.[1]

Dudjom Drakngak Lingpa was born in Lhatsedrak in 1871, a sacred place of the Five Manjushri Families in the Nangchen region of northern Kham.

Identified as a reincarnation of Atsarsalé

In the néyiks, pilgrimages guides, he revealed, Dudjom Drakngak Lingpa is prophesied by Guru Rinpoche as an emanation of Acharya Salé, the renowned consort and disciple of Yeshe Tsogyal.

Identified as a reincarnation of Saraha

Dudjom Drakngak Lingpa is also celebrated in his hagiographies as the rebirth of Saraha.

He is also celebrated as a rebirth of Taksham Nüden Dorje (1655-1708), an earlier tertön who also revealed texts on Pemakö’s innermost realms[2], [3]

As it often the case with tertöns, Dudjom Drakngak Lingpa was known under different names:

Being trained by the first Drubwang Tsoknyi Rinpoche

His principal guru was the first Drubwang Tsoknyi (1828/49-1904) whose pith instructions guided him to tantric realization.

Dudjom Drakngak Lingpa also received teachings from Jamgön Kongtrul (1813-1899) who authenticated his realization and status as a tertön.[4]

In the early 20th c., migrating to Pemakö in search of the innermost womb and secret chakras of Vajravarahi

The first decade of the twentieth century was a period of major political disturbance in Tibet, with the violence instigated by the Qing dynasty official Zhao Erfeng against Tibetan monasteries in 1905 and his subsequent invasion of Eastern and Central Tibet. Nearly two thousands Eastern Tibetans (Khampas) migrated to Pemakö around that this time, many following tertöns and their néyik prophecies to further open the hidden land. These Khampas are now one of the main groups of inhabitants of Pemakö, along with people of the Adi, Mishmi and Memba tribes who are native inhabitants of the region. It was likely under these circumstances, sometime in the early twentieth century, that Dudjom Drakngak Lingpa migrated to Pemakö in search of the innermost womb and secret chakras of Vajravarahi.[5]

By the power of Dudjom Drakngak Lingpa’s past prayers and connection with Guru Rinpoche, he was impelled to wander through Himalayan hidden lands, opening their mandalas and receiving revelations, sometimes publicly.[6]

Dudjom Drakngak Lingpa revealed three néyiks during a time of political conflict in Eastern Tibet at the start of the twentieth century. These texts illustrate a recent stage in the progressive opening of the hidden land of Pemakö along the lower Tsangpo River and up one of its tributaries, now known as the Yang Sang Chu (‘Most Secret River, Wyl. yang gsang chu). This further opening effectively extended Pemakö beyond its limits as they seem to have been previously understood, and placed her most sacred sites—the Vajravarahi’s womb and secret chakras (Wyl. yang gsang gnas)—on the India side of the Sino-Indian border where they have become accessible as pilgrimage sites to diasporic Tibetans.[7] 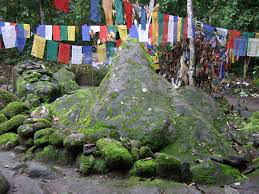 A unique feature of Pemakö as a hidden land overall, and of Dudjom Drakngak Lingpa as a tertön, is the apocalyptic prophecy that assigns Pemakö’s womb chakra as the ‘Deathless Extreme Secret Place’ (’Chi med yang gsang gnas) from where the seeds of humanity will regenerate themselves after being extinguished at the end of the Dark Age. These seeds are said to be stored in a treasure chest under Padmasambhava’s throne at the top of Dewakota hill.[8]

Along with these néyiks, Drakngak Lingpa revealed part of Guru Rinpoche’s throne at the top of Dewakota.

According to Norma Levine[9],

We sat and meditated, listening till all sounds blended with the nature of mind. Hours passed before we slowly came to our feet and walked the stone stairs to the top of Dewakota. A clearing showed a modest stone temple – built by Terton Nang Gey then damaged in 1950 in a massive earthquake and rebuilt – a wooden shack for pilgrims’ retreats, another larger primitive wooden dwelling for guests and a jubilant band of proud cockerels who had been saved from the chop. A Lama with a white wispy beard and long gown, crinkled his face in ageless joy as he showed us to our beds in the guesthouse. He could have played the deathless Lama in Lost Horizon.
I walked to the temple to examine a pitch-black stone throne standing magnificently beside it. ‘This is the most important terma treasure of Pemako,’ said Ata. ‘It’s the stone throne of Guru Rinpoche.
This terma is just outside the temple [in Dewakota, Pemakö] and was originally revealed by Dudjom Drakngak Lingpa. Dudjom Rinpoche confirmed that this special terma, the throne of Guru Rinpoche, would benefit many beings in the future.

According to Dylan Esler[10] ‘Moreover, the prophecies of Guru Rinpoche foretell that when humanity is extinguished, it is from this place that the human race will regenerate itself. The terma consists, in part at least, of Guru Rinpoche’s seat. Unfortunately, however, it was damaged by a young lama who touched it prematurely.’

In 1920/22, inviting to Dewakota Dudjom Rinpoche to grant the Rinchen Terdzö for the first time

In 1929, Dudjom Rinpoche predicted that Drakngak Lingpa’s termas will benefit many beings in the future

Offering his daughter in marriage to Dudjom Rinpoche

The compilation of his termas and writings fill eight volumes[12]

Among his writings are three néyiks, pilgrimages guides, who are all termas:

His incarnation is Tulku Pema Rigdzin (20th), based in Pemakö.