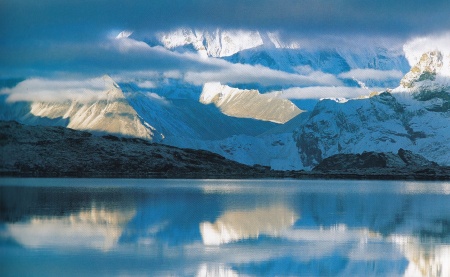 Dawn in the Béyul Khembalung. ‘The great fluted wall of Shartse-Lhotse is reflected in one of the lakes near Tso-sho-rimi, the “Lama’s throne.” This may be the Tso-me-lung where “people can see their future”. Stephen Venables, Everest Summit of Achievement, Royal Geographical Society, London, Ted Smart, 2003, p44.

Khembalung is a hidden land located on the southern slopes of Mount Everest, in Nepal.

More than a thousand years ago, Tibet’s great Buddhist king, King Trisong Detsen, ascended the throne. At the age of 21, he invited several Buddhist masters to help extend the influence of their religion in Tibet, founding the first of the monasteries that would shape Tibetan life until the Cultural Revolution in 1966. One of the teachers was Guru Rinpoche, the lotus-born. He revealed to King Trisong Detsen the existence of a béyul called Khembalung, which had formed when a lotus flower fell to earth, a gift from the king of the gods that went astray. He prophesied that it would be a heavenly refuge during times of war and catastrophe in Tibet, when the Dharma would be under threat.[1]

Khembalung (or Khambalung) is the pronunciation of the word spelled “Khenpa lung” in Tibetan. Chopel Namgyal thought that the word “khenpa” might refer to a type of grass (which may be used in making incense) found in the hidden valley. People in Khembalung were certain that the term did not refer to “Khampas” (Tibetans from the province of Kham). “Lung” simply means valley. “Be” means hidden and “yul” means country.[2]

In Khembalung, Bhong Chu, a river older than the Himalayas themselves, turns sharply south, dropping steeply toward the Gangetic plain in Nepal where the river is called the Arun. The gorge is so deep that monsoon rains penetrate along its course deep into the mountains, almost to the foot of the East Face of Everest itself. Consequently, the valley is fertile and verdant, a contrast to the arid Tibetan plateau. It is one of the most beautiful valleys on earth, surrounded by gigantic mountains, their fluted ridges silhouetted against the crystalline sky or looming through gaps in heavy gray clouds. The lower hillsides are blanketed with juniper and silver firs, mountain ash and birch, willow and vast rhododendrons. Plants and flowers, many of them used in Tibetan medicine, are spread across the higher, treeless slopes in summer, chief among them the red and blue poppies of the genus Meconomsis—upa mendog in Tibetan—the very lotus flower that the king of the gods had let fall to earth.[3]

The most sacred place is a cave located at about 2,210m. This lies about six miles upstream from the confluence of the Arun and Choyang Rivers. The site of the cave is nearly 420m above the river on the west side of the gorge. Due to a bend in the river, the section of the river valley in which the cave is located cannot be fully seen from the main north-south trail which runs along a ridge above the east bank of the Arun. One must go off main trails and on to the ridges on either side of the Choyang in order to obtain an unobstructed view.[4]

Often one finds the valleys shrouded in grey mist. The great massif of Chamlang (7,317m. or 24,006’) stands as a major weather break, with the result that there is considerable precipitation south of the mountain. The river valleys, such as the Choyang, which extend down from the south and south-eastern slopes of Chamlang have a wide variety of vegetation including dense subtropical forests.[5]