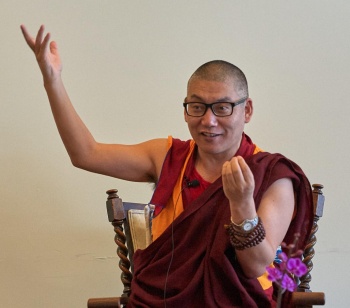 Choying Dorjee learned reading and writing at the age of six. He received numerous empowerments and teachings from Leda Jangchub Dorjee and his monastic vow from Gila Rinpoche, aka Ngawang Chophel Zangpo.

In accordance with the last wish of his late father, coupled with his own commitment and on the advice of Tromtar Khenchen Yeshi Zangpo from whom he received the master’s explanation on the Lamdré teaching and the Compendium of Sadhanas, he joined Dzongsar Shedra in India in 1992 where he completed the study of the Eighteen Renowned Scriptures including auxiliary teachings under Khenpo Kunga Wangchuk and other teachers whom Khen Rinpoche nurtured.

Khenpo Choying Dorjee was appointed as an assistant teacher in 1999 and as a teacher in 2001. In 2002, amidst the large gathering of shedra khenpos and monks, Khenpo Kunga Wangchuk enthroned Khenpo Choying Dorjee as Khenpo and gave him the name of Shedra Khenchung. In 2004, Dzongsar Jamyang Khyentse Rinpoche awarded him the Khenpo certificate in the presence of H.H. the Dalai Lama. In 2005, he was appointed as the Khenpo of Dzongsar Dharma Center in Malaysia and went to learn English at the British Council in Singapore the next year. He returned to the Shedra in 2008 as advised by Khenpo Kunga Wangchuk.

Khenpo Choying Dorjee gives teacher training workshops for Buddhist teachers including westerners and is one of the khenpos teaching in the Milinda Program, a 10-year contemporary shedra for westerners.

He teaches in America, Asia, Australia and Europe and always strives to make the teachings understandable and applicable in everyday life.