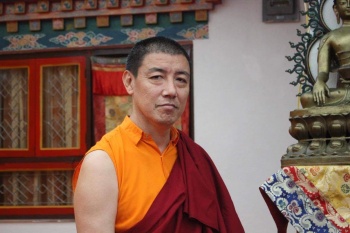 He received the lopön degree from His Holiness the Dalai Lama in the year 2010 and was enthroned as a khenpo at Namdroling Monastery in 2011 by His Holiness Karma Kuchen Rinpoche. Khenpo has served Namdroling Monastery for many years. He served in the Rigzod Editorial Committee as an editor and translator for over seven years. Subsequently, he founded the Padma Mani Translation Committee (PMTC) of NNI, where he taught translation, administered and supervised for six years. He was also one of the founding members of Ngagyur Nyingma Research Centre (NNRC), the research unit of NNI, and worked for the committee for five years. Beside this, he has also represented Namdroling Monastery in various platforms such as national and international seminars and conferences related to Buddhist philosophy and practice. He also taught at Thubten Leksheyling Tibetan Buddhist Centre in Bangalore, Deer Park Institute in Bir, Pune in Maharashtra and Calicut in Kerala. Presently, he is a lecturer on Mahayana at Abiding Heart Education, Nepal.

Khenpo has also worked for the late His Holiness Penor Rinpoche and Khenchen Pema Sherab Rinpoche in translating their teachings from Tibetan to English in order for foreigner students to be benefited from the teachings. He has translated and published English books such as How to Follow a Spiritual Master, The All-Pervading Melodious Sound of Thunder: The Outer Liberation Story of Terton Migyur Dorje and Drops of Nectar.

Khenpo also travels extensively with his teacher, Khenchen Pema Sherab Rinpoche during his teaching tours around the world and gets the privilege to receive countless precious teachings, empowerments and instructions from Khenchen Rinpoche.