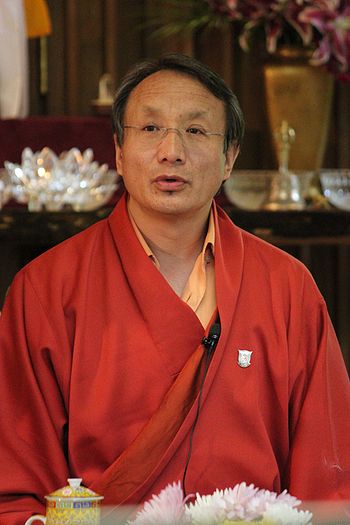 Lama Chönam aka Chöying Namgyal (b. 1964) is a direct disciple of Khenpo Munsel and Khenpo Jikme Phuntsok. After having left Golok in 1992, he came to the United States and founded the Light of Berotsana Translation Group.

Lama Chönam was born in 1964 in the Golok Ah Kyong region of Tibet[1].

Lama Chönam entered Wayen Monastery, Tibet, at the age of 14. Under the direction of Khenpo Gönpo Norbu and Khenpo Yeshe Rangdröl, he studied many of the texts central to the Buddhist tradition, among them:

From Tülku Kadag, Lama Chönam received the teachings of the Longchen Nyingtik tradition.

From Khenpo Tendzin, he received the teachings of Avalokiteshvara as well as the vows and instructions for bodhisattvas.

From the rebirth of Katok Khenpo Jorden, he received in their entirety the teachings of the lineage of Rigdzin Düddul Dorje.

Lama Chönam’s primary teacher is Khenpo Munsel. From him, he received the complete teachings of the Nyingtik tradition beginning with the Ngöndro, followed by one hundred days of solitary meditation focusing upon the Dzogchen cycle of Trekchö and Tögal, as well as the instructions taken from Jikme Lingpa's Yeshe Lama. For a period of three years, Lama Chönam practised meditation under the guidance of Khenpo Munsel. Following this time of contemplative practice, Lama Chönam received from Khenpo Munsel the transmission of the Seven Treasures of Longchenpa.

From the learned teacher Khenpo Jikme Phuntsok, Lama Chönam received many teachings including a cycle associated with Manjushri.

From Orgyen Kusum Lingpa, he received the Chetsün Nyingtik cycle of teachings.

From Khenpo Tsöndrü, he received the teachings from the Collected works of Patrul Rinpoche and, with Thongphün Tülku, Lama Chönam studied Tibetan calligraphy as well as the Sanskrit alphabet.

Lama Chönam later went to study with the scholar Delek Rabgyay, staying with him for several years; he studied grammar, poetry, history, the tenets of various Buddhist schools, and the minor sciences.

During the past ten years, Lama Chönam has been teaching Buddhist view and meditation as well as the Tibetan language, learning English, assisting in the work of translation, and studying under the guidance of one of his main teachers, Thinley Norbu Rinpoche.

Lama Chönam has served from 1995-1999 as the senior advisor to Robin Kornman of The University of Wisconsin at Milwaukee and The Tibetan Institute of Literary Studies for the translation of the first three books of the epic poem celebrating and recounting the life of Gesar of Ling.

Lama Chönam has served as advisor and teacher to the Nalanda Translation Committee during the past four years and in 1999 helped to establish the Light of Berotsana Translation Group.