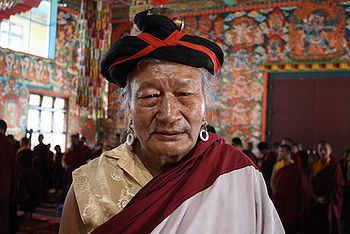 He was born in Tibet, in Amdo. His father was called Urgyen Tagu, his mother Dolker Tsenzin.

When Lama Jamphel Sherap Rinpoche was 17 years old, he left his home and went into pilgrimage to different spiritual places in Tibet. In 1947, he went to India and Nepal for pilgrimage. In the northern part of India, in a place called Garshak, he studied with Lama Kunga Rinpoche, a direct student of Tokden Shakya Shri, and received from him detailed teachings on tsa-lung. Later, he received from Dudjom Rinpoche the complete Dudjom Tersar empowerments and the Rinchen Terdzö. Lama Jamphel Sherap Rinpoche came to Duddul Raptenling, in Odissa, where he did a retreat under the guidance of Lama Dorje Namgyal Rinpoche.