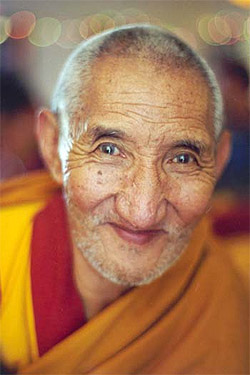 Ribur Rinpoche (1923-16 January 2006) was born in the Kham region of Tibet, and was recognized by the Thirteenth Dalai Lama as the reincarnation of the head lama of Ribur Monastery. After studying at Sera Mé Monastery, where he received numerous teachings from his root guru, Pabongka Rinpoche, Rinpoche received his geshe degree in 1948. Rinpoche was then confined in Lhasa from 1959 until 1976, during which time he experienced relentless interrogation and torture during thirty-five of the infamous struggle sessions. "If I told you what happened on a regular basis, you would find it hard to believe."

At the end of the Cultural Revolution in 1976, Ribur Rinpoche spent more than 10 years in Chinese labor camps and was given a job with the Religious Affairs Office in Tibet. On one of his trips to China, he worked with the Panchen Lama and recovered holy objects—including the famous Shakyamuni Buddha statue in the Ramoche temple—that had been dismantled and shipped to China. He also re-established the destroyed stupa of Lama Tsongkhapa, which contained some of Lama Tsongkhapa's bodily relics.

Since his exile to India in 1985, Ribur Rinpoche wrote numerous biographies of great lamas such as the Thirteenth Dalai Lama and an extensive history of Tibet, which includes his autobiography. Ribur Rinpoche spent many years living in northern California where he gave teachings and led retreats, before returning to India, where he passed away.

He stopped breathing at Sera Mé Monastery on the full moon during H.H. the Dalai Lama's Kalachakra empowerment in Amaravati, India.

Ribur Rinpoche was known for constantly stressing the importance of keeping the authentic Buddhadharma alive in the hands of well-trained geshes and khenpos for the future of the teachings.