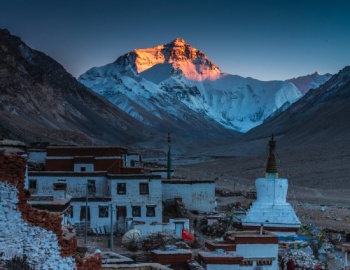 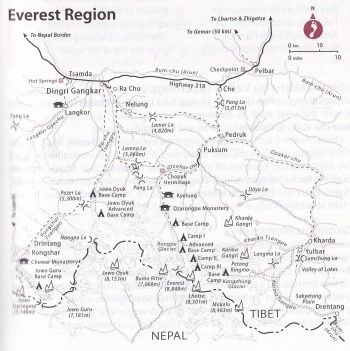 Map of the Mount Everest area on which Rongpuk Monastery is written as Dzarongphu. Copyright Footprint.

Rongpuk Monastery is located on the northern slopes of Mount Everest, Basum Township, Dingri County, in Shigatse Prefecture of the Tibet Autonomous Region in China. It lies near the base of the north side of Mount Everest at 5,009 metres (16,434 ft.) above sea level, at the end of the Dzakar Chu valley. Rongpuk is one of the highest-elevation monasteries in the world. For Sherpas living on the southern slopes of Everest in the Khumbu region of Nepal, Rongpuk Monastery was an important pilgrimage site, accessed in a few days' travel across the Himalaya through the Nangpa La.[1]

Rongpuk monastery sits near the end of the Rongpuk Glacier. In the distance, the north side of Mount Everest, “The Peak Above the Valley”, dominates the view.[2]

Above Rongpuk Monastery, the trail continues up to the Everest Base Camp (5,150 m), located in a sheltered spot below the moraine slopes leading up to the Central Rongpu Glacier. 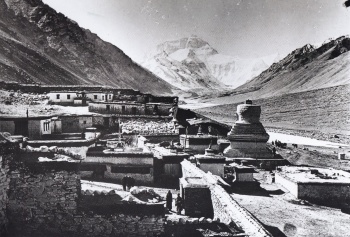 Since the 18th century, communities of nuns affiliated with the Nyingma tradition of Mindroling Monastery have been living in the Dzarong area.[3]

In 1902, the complex of what was to become Rongpuk monastery was revitalized by Trulshik Dongak Lingpa and by his student Ngawang Tendzin Norbu. The temple they constructed was named Dongak Chöling.[4]

Affiliated monasteries in Nepal, on the southern slopes of Mount Everest 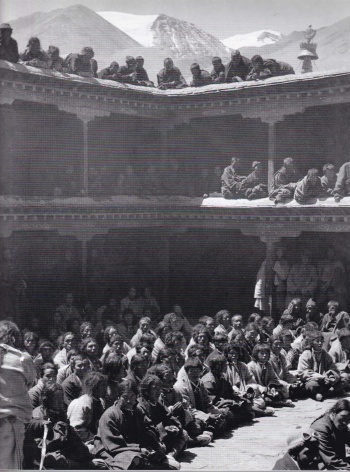 Over the years, branch monasteries were also established south, across the Nangpa La pass in the Shar Khumbu region of East Nepal. At the high point of its development, the area of Dzarongpu (meaning “upper reaches of the Dza valley”) had over 500 monks and nuns. 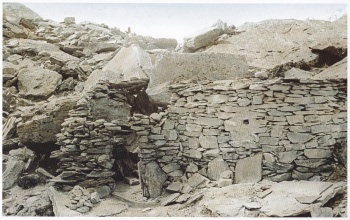 In the 1920s and 1930s, Rongpuk monastery was regularly visited by the early expeditions to Mount Everest which were arriving there after a five-week journey from Darjeeling in the Indian foothills of the Himalaya. Most past and current expeditions attempting to summit Mount Everest from the north, Tibetan side establish their Base Camp near the tongue of Rongpuk Glacier about 8 km (5 mi) south of the Monastery.[5] Early British mountaineering expeditions have provided invaluable documentary evidence concerning the monastery’s development on Trulshik Dongak Lingpa’s activities.

Being razed during the Cultural Revolution

Rongpuk monastery was virtually razed during the Cultural Revolution of the 1960s. Since that time and while he was alive, Trulshik Rinpoche was not able to go back to his monastery.

After the opening up of Tibet to foreign tourists in 1980s, the Chinese authorities realized that it would be politic to reopen a few monasteries. Much of the Rongpuk complex, including the flag-decked chorten, has now been rebuilt.[6]

The recently renovated assembly hall contains an image of Trulshik Dongak Lingpa, whose present incarnation lives in Nepal, alongside an image of Terdak Lingpa, founder of Mindroling. In addition to the liturgical texts of the Mindroling cycle, the Longchen Nyingtik is also an important spiritual practice for the 30 monks and nuns who live there. Additional rebuilt chapels include the Kangyur Lhakhang and the Zhitro Lhakhang. A hermitage affiliated with the monastery is also located above a nearby rockslide and alongside a Padmasambhava grotto. Here are the ruins of Sherabling Nunnery and a residence built by Trulshik Dongak Rinpoche.[7]