Sándor Kőrösi Csoma was born in 1784 and spent the early part of his life in his native village of Körös in Hungary. From a relatively young age, he showed an interest in the origins of the Hungarian people, and in spite of his parents’ poverty managed to gain a scholarship to the University of Göttingen. His original intention had been to enter the church, but he became increasingly interested in the cultures of Asia, and grew determined to see them for himself. He set off in 1819, at the age of thirty-five, on a mission to find the origins of the Hungarian people in Asia. 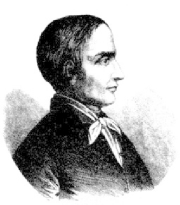 His arduous journey took him through Egypt, Baghdad and Afghanistan, as he was often forced to change his route in order to avoid outbreaks of war and disease. He arrived in India in 1822 and made for Kashmir. On June 9, 1822 he made his first contact with Tibetans in Leh, the capital of Ladakh. He also met a British officer of the East India Company named Moorcroft to whom he related the purpose of his journey, and who encouraged Csoma to study Tibetan and drew his attention to a book called Alphabatum Tibetanum written by an Italian Jesuit missionary named Georgi. At the same time, Csoma was also introduced to a native scholar who knew Persian and Tibetan. Since he was familiar with Persian, Csoma now used this as the medium for acquiring his first Tibetan.

It was not long before, in May 1823, he began his decade-long stay amongst the lamas of Zanskar, during which time he completed both his dictionary and grammar of the Tibetan language.

His work soon attracted the attention of the Asiatic Society of Bengal, prompting an invitation to Calcutta, and all the help needed for his grammar and dictionary to be published in 1835.

In 1842 Csoma left Calcutta for Darjeeling. He hoped to travel onwards to Lhasa in search of a people called the Yugars whom he believed were the progenitors of the Hungarians. Tragically, he contracted malaria soon after his arrival in Darjeeling, and died there on April 11, 1842. His grave may still be seen in Darjeeling. 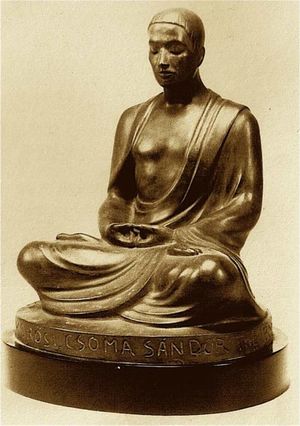 Statue of Csoma as a bodhisattva

On February 22, 1933, Csoma was officially canonized as a bodhisattva in Tokyo. To honour the occasion, a statue of the Hungarian lexicographer seated in meditation posture was installed in the Japanese Imperial Museum.