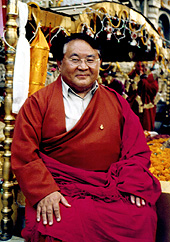 Sogyal Rinpoche (Wyl. bsod rgyal rin po che) Born into the Lakar family in Kham in Eastern Tibet, Sogyal Rinpoche was recognized as the incarnation of Lerab Lingpa Tertön Sogyal, a teacher to the Thirteenth Dalai Lama, by Jamyang Khyentse Chökyi Lodrö, one of the most outstanding spiritual masters of the twentieth century. Jamyang Khyentse supervised Rinpoche's training and raised him like his own son.

With his remarkable gift for presenting the essence of Tibetan Buddhism in a way that is both authentic and profoundly relevant to the modern mind, Sogyal Rinpoche is one of the most renowned teachers of our time. He is also the author of the highly-acclaimed and ground breaking book, The Tibetan Book of Living and Dying. Two million copies of this spiritual classic have been sold in 29 languages and 56 countries. It has been adopted by colleges, groups and institutions, both medical and religious, and is used extensively by nurses, doctors and health care professionals. Rinpoche is also the founder and spiritual director of Rigpa, an international network of 106 Buddhist centres and groups in 23 countries around the world. He has been teaching for over 30 years and continues to travel widely in Europe, America, Australia, and Asia, addressing thousands of people on his retreats and teaching tours.

More video extracts are available on the Rigpa website http://www.rigpa.org/Sogyal_Rinpoche_video.html 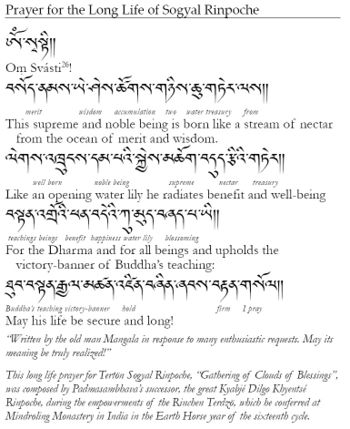 
SÖNAM YÉSHÉ TSOK NYI CHU TER LÉ
This supreme and noble being is born like a stream of nectar from the ocean of merit and wisdom.


TEN DRÖ PEN DEI KUMÜ SHYÉ PA YI
For the Dharma and for all beings and upholds the victory-banner of Buddha’s teaching:


“Written by the old man Mangala in response to many enthusiastic requests. May its meaning be truly realized!”