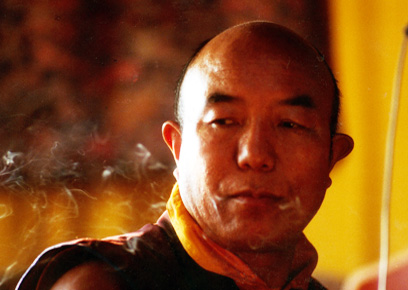 Tenga Rinpoche at the Rigpa centre in London in 1982.

Tenga Rinpoche was born in 1932 near Benchen Monastery in Kham. He was recognised as the incarnation of Lama Tendzin Chögyal by the previous Tai Situ Rinpoche, Pema Wangchok Gyalpo, at the age of seven, whereupon he began his studies. He was given the name Karma Tenzin Trinlé Pal Sangpo at the age of 19, when he received his full ordination vows. He received extensive and thorough Buddhist training and education in Benchen Monastery from the Ninth Benchen Sangyé Nyenpa Rinpoche, Karma Shedrup Tenpé Nyima, and in Palpung Monastery from Palpung Situ Pema Wangchok Gyalpo and Karsé Kongtrul.

He studied all the tantric rituals and philosophy with many different masters. From his uncle he learned about traditional Tibetan medicine. He completed his studies with a three-year retreat.

In 1959, after the Chinese invasion, he left Tibet and after spending one and a half years in Kalimpong he settled in Rumtek Monastery in Sikkim, the main seat of the sixteenth Gyalwang Karmapa. There he served the Karmapa for 17 years, the last nine years of which he acted as dorje lopön (vajra master). He was also an expert in mandala painting and sculpture. In 1974 he accompanied the Karmapa on his first tour to America and Europe.

From 1976 to 2012, Tenga Rinpoche lived in Swayambhu, Nepal, where he founded Benchen Phuntsok Dargyeling Monastery. He also founded a retreat centre in Pharping. From 1978 onwards, he toured Europe extensively. Tenga Rinpoche was one of the few meditation masters who held the still unbroken lineage of the Karma Kagyü tradition. He was also the founder of Karma Kamtsang Association in Poland, Karma Thegsum Ling, Verona, Italy and Lotus Trust as well as Lotus Direkthilfe in Germany.

In 1982 he accompanied Kyabjé Dilgo Khyentse Rinpoche when he visited the Rigpa centre in London. 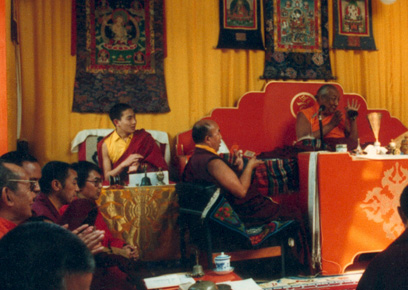 Dilgo Khyentse Rinpoche, Rabjam Rinpoche, Tenga Rinpoche and other lamas at the Rigpa centre in London, 1982.