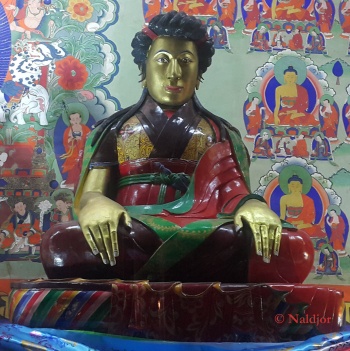 Tertön Rangrik Dorje (Tib. གཏེར་སྟོན་རང་རིག་རྡོ་རྗེ་, Wyl. gter ston rang rig rdo rje) aka Nyala Rangrik Dorje or Kusum Lingpa (1847-1903) — an important master from Nyarong, who was associated with the monastery of Lumorap. He was a disciple of Nyala Pema Dündul (1817-1872) and the master of Nyala Changchub Dorje. Dudjom Rinpoche's teacher, Khenchen Jampal Dewé Nyima, was his younger brother and student. His collected terma revelations were recently published in 42 volumes.

"It is impossible, too, to enumerate all those who passed into the rainbow body by the paths of the profound treasures of the Great Perfection, as exemplified by the Southern and Northern Treasures tradition. Even during this late age, this may still be illustrated. For example, in 1883/84 (water sheep year, fifteenth cycle) [sic] the lord among accomplished masters, Rigdzin Pema Dündul, vanished in the body of light. Afterwards, when his personal disciple, Tertön Rangrik Dorje passed away at Mindroling, his remains vanished into light. What was left behind, which was about six inches in size, was taken to Lumorab in Eastern Tibet, where it can still be seen today."