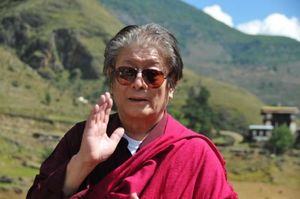 Thinley Norbu Rinpoche or Dungsé Thinley Norbu (Wyl. gdung sras phrin las nor bu) (1931?-2011), a prominent modern teacher in the Nyingma lineage, was the eldest son of Dudjom Rinpoche and the father of Dzongsar Khyentse Rinpoche. He was the incarnation of Tulku Trimé Özer, who was one of seven sons of Dudjom Lingpa, and was also considered to be an emanation of Longchenpa. In his youth in Tibet he studied for nine years at Mindroling Monastery. He used to live in New York state, USA.