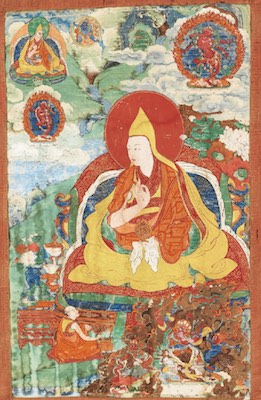 Tsangyang Gyatso (Tib. ཚངས་དབྱངས་རྒྱ་མཚོ་, Wyl. tshangs dbyangs rgya mtsho) (1683-1706) — the Sixth Dalai Lama. He was born at Urgelling Monastery in the northwestern part of present day Arunachal Pradesh. The Regent Desi Sangye Gyatso kept the death of the Fifth Dalai Lama secret for many years, one reason being to complete the Potala palace and to keep the administration stable. As a Dalai Lama, Tsangyang Gyatso composed many songs and poems that gained popularity in Tibetan and China and also enjoyed a lifestyle that was at odds with the Gelug monastic system. He preferred to wear layman clothes and spent nights in the streets of Lhasa, drinking wine, singing songs and having relationships with women.

Tsangyang Gyatso was kidnapped by China's Kangi emperor Lha-Bzang Khan and mysteriously disappeared. He composed a poem that some say foretold his next rebirth as Kalzang Gyatso.