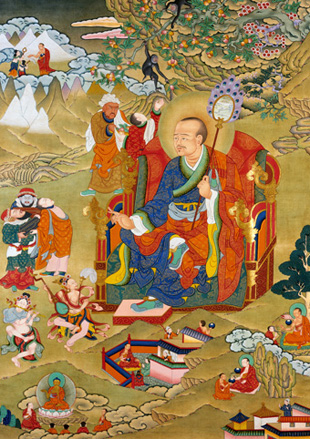 Raised as a prince he became a learned scholar. Upon hearing the Dharma from the Arhat Katyayana he took lay vows. Eventually he became disillusioned with worldly life and requested full ordination. Later, he was badly treated by the king of another city and in anger he requested to be released from his vows in order to raise an army. Katyayana asked him to wait one more night. That night in a dream Vajriputra saw what the consequences of his anger would be. He then received further teachings from Katyayana and became an arhat.

Vajriputra dwells in Sri Lanka with 1,000 arhats. He holds a scented fly whisk which confers wisdom and control of the mind. His right hand is in the mudra of dispelling fear. He strengthens concentration and wisdom in those who work for others.