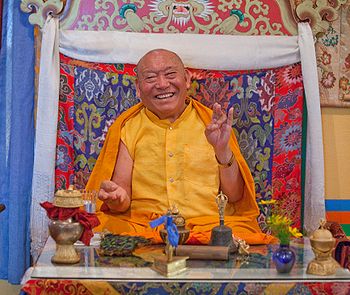 Wangdor Rinpoche (b.19??) is a Drukpa Kagyü and Nyingma Tibetan monk and lama based in Tso Pema, India. Trained first in Dzigar Monastery in Kham, he became a main student of Thuksey Rinpoche. After fleeing to India in 1959, he settled in Tso Pema, where he has spent many years in retreat under the direction of Dudjom Rinpoche. Since then, Wangdor Rinpoche has spent more than 55 years meditating in the caves above Tso Pema.

Wangdor Rimpoche was born in Tibet, into a family of nomads, the Hara clan, in Kham, Eastern Tibet, and given the name Jangchub Nyima. [1] When pregnant, his mother dreamed that Tara came to her, placing a right-turning conch shell[2] swirled with rainbow light into her hand. Tara instructed, “Keep this for me.” She then flew off into the sky. The mother recognized the dream to be a sign related to the promising birth of Wangdor Rimpoche and his precious life of sublime qualities and activities.

At 5, first experience of living in a cave

As Tibetan nomads, Wangdor Rimpoche’s family traveled from place to place in Tibet, setting up camp in yak hide tents and living a life of community in the country of Derge. When Wangdor Rimpoche was four or five, he was sent to live in a cave with his mother’s brother, a Dzogchenpa named Metog. There he quickly learned letters and reading. Since this early experience living in a cave, Wangdor Rimpoche has spent most of his life in retreat. Solitary retreat in caves has been interspersed with receiving monastic teachings, empowerment and transmission from his principal teachers.

From 7 to 19 years old, studying in Dzigar Monastery

During his early years at Dzigar Monastery, Wangdor Rimpoche further learned letters, reading and writing from the monk Tenju. He studied the Vinaya and was inspired to become a Pandita. Wangdor Rimpoche had two scholars as everyday teachers, Khenpo Karma Tsetin and Khenpo Chunchog. He was instructed in the sutras and tantras and mastered the Tibetan language, grammar and poetics. Eventually he was initiated by Trongru Gyatrul and given the religious name Rigdzin Wangdzok Dorje, the same name he was given at ordination. During this period, Wangdor Rimpoche began to learn the fundamentals of the Drukpa Kagyü and Nyingma schools of Tibetan Buddhism. According to his approved biography, Wangdor Rinpoche “excelled as a student, initially proving his abilities by memorizing a voluminous text within a few months. He received encouragement from his teachers due to his overall potential, unique abilities and ease of study”. At Dzigar Monastery, he met Rigdzin Lhachok Dorje (Wyl. lha mchog rdo rje) (1938-c.1959), the 8th Dzigar Rimpoche, who became one of his principal teachers. While a boy, Wangdor Rimpoche also began to receive teachings and empowerments from Thuksey Rinpoche, who was then also living at Dzigar Monastery since he was little more than an infant and spent most of his time in continuous meditation. Thuksey Rinpoche was the son of the tenth Gyalwang Drukpa and the grandson of the great Dzogchen master Tokden Shakya Shri, who confirmed Thuksey Rinpoche as one of his precious heart sons. While meditating at Dzigar Gonpa, Thuksey Rinpoche finally was persuaded by his students to leave his external retreat and come out into the world to teach and benefit beings who were desperately in need. Until age 19, Wangdor Rimpoche was also a student of two Dzogchen lamas, Khenpo Chenchog at Dzigar Monastery and Karma Setin who lived at the top of an adjacent cliff.

At age 19, Wangdor Rimpoche left Dzigar Monastery and wandered for about one and a half years to many sacred sites in Tibet, until he reached Lhasa where he met up with the 8th Dzigar Rinpoche again. Over the years, Wangdor Rimpoche received teachings from the following masters:

In 1959, fleeing Lhasa to India while carrying Thuksey Rinpoche on his back

While in Lhasa Rimpoche had a dream that a great red wave mounted from the north and swept away Lhasa. He perceived the dream as a sign and warned Lharka Omba Iharka, who was Dzigar Rinpoche’s brother and in charge of his caravan, that they must leave Lhasa immediately due to the warning foretold in Wangdor Rimpoche’s dream. Wangdor Rimpoche could not convince him and he could not convince Dzigar Rimpoche to wait with them. Then Wangdor Rimpoche fled Lhasa beginning his travels from Tibet to India. Everyone who stayed in Lhasa was killed by the Chinese. Wangdor Rimpoche traveled from Lhasa on the long trek to India with a friend Tranam. They came to Drukchen Rinpoche’s monastery where Thuksey Rinpoche was staying. Here they heard Lhasa was lost to the Chinese and the road onward had been closed but Rimpoche and Tranam and a few friends made it past the blockades by claiming to be simple pilgrims. They left the monastery with 10 mules, one carrying Thuksey Rinpoche, others carrying supplies. Getting past the first border and its closed road they lost 7. Three were left, Thuksey Rinpoche rode one. But they came upon a place where mules could not go, and traded them for food with others they met on the trail. Then the group hired mountain men to carry Thuksey Rinpoche (who was very large) and they carried him for one day, but then ran away saying he was too big and it wasn’t worth any money to do more. About a dozen remained in their party but the Chinese Army were coming quickly behind, and would catch them at the rate Thuksey Rinpoche would go. Wangdor Rimpoche would not leave his master behind in Tibet to an unknown fate and decided to stay with him while others fled, fearing for their life. Wangdor Rimpoche simply refused to go on without Thuksey Rimpoche, so he proceeded to carry his master the entire distance from Tibet to India on his own back. On the way to India, sometimes the group fell and folded down into gorges. Sometimes it rained, and they slipped and slid in mud. On the journey they came upon many uncivilized places where people had no clothes and stone tools. They came upon places of thieves where they would steal the blanket around them while they slept. There, if some food was left at night, they were so tired and slept so deeply, in the morning the food and the pot they cooked it in were gone.

Bringing Thuksey Rinpoche alive from Tibet to India is the greatest accomplishment of my life because this master was the head of the Drukpa Kagyü lineage and was the only mind and heart-holder of many significant teachings, empowerments and transmissions that would have been silenced had Thuksey Rimpoche not reached India.

In a written account of the journey from Tibet to India, Twelfth Gyalwang Drukpa, stated that:

Wangdor Rimpoche is agenuine master of meditation and active in benefiting beings through his skills of direct instruction and was one of those who served immensely on the difficult journey from Tibet to India. Ordinary people, even youngsters with nothing on their back had great hardship to cross certain bridges made out of a single tree log, tens of meters high. If one falls off, there is not much hope to survive. Many died on their way with all sorts of hardship but Lama Wangdor carried Thuksey Rinpoche on his back all the way to India with a pure heart. Thuksey Rimpoche’s relative body was not at all a small size, much bigger than Lama Wangdor himself, who is about 5 feet 8 inches tall.

Upon reaching refuge in Assam, India, above Bodhgaya, everyone was ill and transported by Indian officials to the hospital that could best care for the individual refugee’s ailments. Rimpoche had TB and was airlifted to Bombay, where he was treated for one year. After Wangdor Rimpoche recovered from TB, he left Bombay on pilgrimage. He visited Bodhgaya and other sacred places of India for a time, practicing awhile in each until he came to the holy cave where Guru Rinpoche taught Mandarava, the Princess of [[[Zahor]]. As it happened, the cave was empty. Wangdor Rimpoche asked the local villagers of Tso Pema if he could stay there, if anyone lived there. They said the sadhu who lived there had left a few days before. Since that time, Wangdor Rimpoche has kept the cave as his primary residence for over 55 years. Wangdor Rimpoche’s Nyingma lineage transmitted by Dudjom Rinpoche comes to this moment from their first meeting in Tso Pema in the early 1970’s. Under the instruction of Dudjom Rinpoche, they together built the Tso Pema Orgyen Heruka Nyingmapa Gompa, dedicated to the Dudjom Tersar lineage. Since then, Wangdor Rimpoche is a formal lineage holder of the Dudjom Tersar Lineage as confirmed in Dudjom Rinpoche’s last will and testament. Beginning in the 1970’s, he constructed, a monastery near the lake as well as a retreat center on the mountain, available to practitioners of all lineages and nationalities, projects which have taken nearly 20 years to complete.

Since then, meditating in the caves above Tso Pema for over 55 years

Tenzin Gyeltsen Rinpoche also was a foremost teacher of His Holiness the 14th Dalai Lama and of Dilgo Khyentse Rinpoche. Tenzin Gyeltsen Rinpoche would encourage people to make every moment of their life a retreat. This was Tenzin Gyeltsen Rinpoche’s form of retreat. Tenzin Gyeltsen Rinpoche did not engage in conventional wisdom about long retreats of even one day in length. He stated it essential to make every moment of life a retreat, the entirety of life a permanent retreat. This means creating space in the unruly mind, allowing it to slow down and experience a greater clarity, so its negative aspect declines and its positive aspect grows. Whenever this happens, we are in retreat. Labeling a specific period as “retreat” can provide a different emphasis for our practice, but this is not necessarily one that is entirely beneficial. Instead, if one appreciates the potential for every moment to be retreat, life naturally becomes powerfully rooted in Dharma and most beneficial.

Beginning in the 1970’s, building Dzigar Monastery in Tso Pema

Beginning in the 1970s, with the guidance of one of his principal lama’s His Holiness 16th Karmapa Rigpa Dorje, he constructed Dzigar Monastery in Tso Pema. Wangdor Rimpoche also built a retreat center on the mountain, available to practitioners of all lineages and nationalities, projects which have taken over 40 years to complete. During this time period, Wangdor Rimpoche also built a monumental statue of Padmasambhava. The statue is stuffed with relics of Padmasambhava himself as well as many others of the Dzogchen, Nyingma and Kagyu lineages.

In Tso Pema, building a monumental statue of Guru Rinpoche above the lake

More recently, Wangdor Rimpoche has built a monumental statue of Guru Rinpoche above the lake.

Wangdor Rinpoche considers himself Rime and spreads the Dzogchen, Nyingma and Kagyu lineages, and has traveled and taught in Tibet, India, Nepal, South America, Europe and the United States.