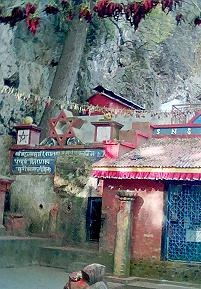 Then at Yangleshö, present day Pharping in Nepal, he practised the sadhana of Yangdak Heruka with the consort Shakyadevi, daughter of a king of Nepal. Powerful spirits caused a three year drought, with famine and disease, and Padmasambhava asked his teachers in India for a teaching to counter them. Two men returned, laden with the tantras and commentaries of Vajrakilaya, and the moment they arrived, the obstacles were pacified. Guru Rinpoche and Shakyadevi both attained the third vidyadhara level, ‘vidyadhara of the great seal, or mahamudra’. Guru Rinpoche recognized that Yangdak is like a merchant engaging in trade—the achievement can be great, but so can the obstacles, whereas Vajrakilaya is like an armed escort; he is needed to guard against obstacles and overcome them. He then composed sadhanas of Yangdak and Vajrakilaya combined, and bound the guardians of Vajrakilaya to protect the teachings.

In Le'u Dünma, in the Prayer Requested by Nanam Dorje Dudjom, it says:

“In the rock cave of Yangleshö in Nepal,
You accomplished the practice of Yangdak, Essence of Great Bliss,
Liberating all obstacles and obstructors through Vajrakilaya:
And, in this sacred place, you attained the siddhi of mahamudra:
To Dorje Tötreng Tsal, we pray!
To the Lotus-born guru of Orgyen, we pray!”

In his commentary to the Lamrim Yeshe Nyingpo, Jokyab Rinpoche writes referring to Guru Rinpoche:

When practicing the Vishuddha Essence of Great Bliss together with the Nepalese Shakya Devi at Yangleshö in Nepal, he manifested the vidyadhara level of Mahamudra which belongs to the path of meditation.[1]