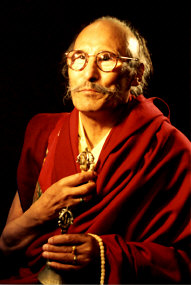 Yeshe Dorje Rinpoche was a close student of Dudjom Rinpoche, and an accomplished Chö practitioner. In 1959, he arrived in India and settled in Darjeeling. Due to his expert Chö practice, he became one of the major weather controllers for the Dalai Lama.

Yeshe Dorje Rinpoche helped many people with the practice of Tröma Nakmo. He gave many teachings and instructions to the students of lamas who came to the U.S. (like those of Lama Tharchin Rinpoche, Chagdud Tulku Rinpoche, and Gyatrul Rinpoche), and helped them deepen their practice of Tröma Nakmo, as this is a widespread practice amongst the students following the Dudjom Tersar lineage.