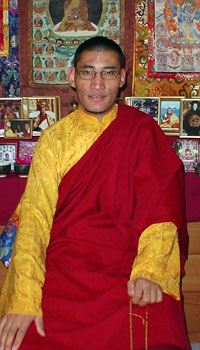 At the age of eighteen, he was formally enthroned as the Fifth Amnyi Trulchung Rinpoche and abbot of Ju Mohor Monastery. His education continued at the university centre of Larung Gar at Sertar, where he studied under Khenpo Jikme Phuntsok Rinpoche. After graduating as a khenpo, he returned to Ju Mohor to teach.

In 2001, Amnyi Trulchung Rinpoche had an audience with His Holiness the Dalai Lama in India. His Holiness advised him to travel to the West. Rinpoche was later invited to visit New Zealand, where he gathered a group of students to form the Rigdzin Bumtsog Trust. Rinpoche has since travelled and taught in the UK, The Netherlands, Belgium, Spain, Luxembourg, Hong Kong, Singapore, Nepal and Australia.