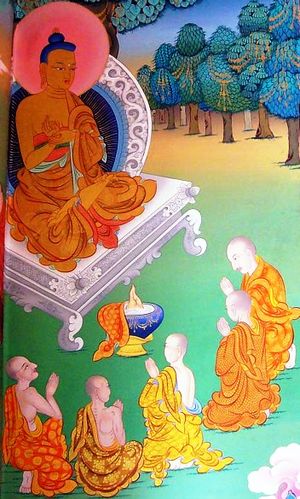 Buddha Shakyamuni turning the Wheel of Dharma for the first time

Three Turnings of the Wheel of Dharma (Skt. tridharmacakra; Tib. ཆོས་འཁོར་རིམ་པ་གསུམ་, chö khor rimpa sum, Wyl. chos 'khor rim pa gsum) — the three major series of teachings given by the Buddha, according to the Indo-Tibetan Buddhist tradition and as found in the Samdhinirmochana Sutra. To 'turn the wheel of Dharma' means to teach the Dharma.

Brief Explanation of the Three Turnings

According to Dilgo Khyentse Rinpoche, the three turnings can be related to the following quote from the Prajñaparamita sutras[1]:

“Mind is devoid of mind. The nature of mind is clear light.”

The Nyingma View of the Three Turnings

According to the Nyingma School, the first turning is of provisional meaning, whereas the second and third turnings are both of definitive meaning.[2]

Main Sutras of the Three Turnings