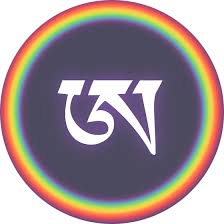 'A' syllable in Tibetan

The Yangti Nakpo (Tib. ཡང་ཏི་ནག་པོ་, Wyl. yang ti nag po), the Black Quintessence, or, to give its full title, The Single Golden Letter of the Black Quintessence (ཡང་ཏི་ནག་པོ་གསེར་གྱི་འབྲུ་གཅིག, yang ti nag po gser gyi 'bru gcig), is a cycle of Dzogchen teachings that includes practices focusing on dark retreat (Yangti). First discovered in the 15th century by Dungtso Repa 'the later', it was later rediscovered by Trulshik Dongak Lingpa, the previous incarnation of Trulshik Rinpoche. Therefore there are two lineages for the Yangti Nakpo: the long lineage transmission (ring gyu) from Dungtso Repa 'the later' and the short lineage (nyegyü) through Trulshik Dongak Lingpa.

According to Tulku Sang-ngag Rinpoche,

‘Within the Nyingma system of Dzogchen there are the Mind category (Semdé), the Space category (Longdé), and Category of Pith Instructions (Mengakdé) classes of teachings. Within the Category of Pith Instructions, there are the Ati, Chiti, and Yangti levels of teaching. As the name suggests, the Yangti Nagpo teachings belong to the Yangti or quintessence class.’[1] [...]
That which is called Yangti refers to the very essence of the enlightened mind of Samantabhadra, Vajrasattva, and Vajradhara. It is the culmination of the Heart Essence of the Lotus Born, the Dakini’s Whispered Lineage, the swift path to buddhahood.
How marvelous! What fortune to obtain this through the kindness of the guru. It is said to lead to liberation if seen, heard, or thought of. If supremely praised as such by the vajra words of truth found in the tantras of true words, no need to mention if one meditates on its actual meaning.[...]
Without looking for buddhahood elsewhere, the Yangti path can show it directly to you right now. This amazing Dharma! In this existence, when this incomparable, peerless wish-fulfilling jewel has been obtained, don’t search for trinkets.[2]

Although sometimes mistakenly considered to be solely focused on dark retreat, Yangti Nakpo is in fact an extensive cycle of spiritual trainings spanning the breadth of Tibetan Vajrayana practice. In Tulku Sang-ngag’s Yangti Gomde center, students are trained in these many practices within the categories of Ngöndro, kyerim, dzogrim, and Dzogchen. In both the old and new revelations of the Yangti Nakpo cycle, dark retreat is the main emphasis and the primary unique feature of these teachings setting them apart from of Dzogchen cycles. However, entering into dark retreat does not not happen right away, if at all.

The Yangtik Ngakpo include many texts and practices, and among them are the following:

The Yangti Nakpo was brought to Tibet by Guru Rinpoche and hidden as a terma by Yeshé Tsogyal.

In the 15th century, it was discovered by Dungtso Repa 'the later' at Lake Mandal Nakpo in the Gampo Region of central Tibet, who revealed a Dzogchen guru sadhana and a dark retreat instructions.

In the 19th century, Chinkar Donyo Dorje, a contemporary and close Dharma friend of Shabkar Tsokdruk Rangdrol, made further Yangti Nakpo revelations including the guru sadhana, Kusum Tuktik. At that time however, he stated the conditions were not right for these additions to the cycle to be disseminated, and that in his subsequent incarnation he would re-reveal and transmit these teachings.

Among the main other students of Trulshik Dongak Lingpa who received the Yangti Nakpo was Ngawang Tenzin Norbu, the 10th Dzatrul Rinpoche, who was who was a prophesied Chödak of the cycle.

In the first part of the 20th century, the two main lineage holders of the Yangti Nakpo in their generation were Khetsün Zangpo Rinpoche (1920-2009) and Trulshik Rinpoche(1924-2011).

Trulshik Rinpoche painstakingly received from and practised the cycle with Shuksep Jetsünma and also from his root teacher Ngawang Tenzin Norbu. He later wrote extensive commentaries on key points of both practice and ritual,