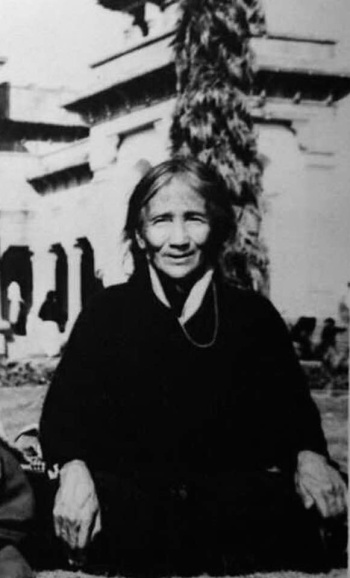 Her family was originally from the Drikung Kagyü tradition. She first studied with Tselung Tsampa, the teacher of Lama Kadak. Later, with her husband, she met and became a student of Golok Serta Rinpoche. She used to be part of the wandering Tröma Nakmo (Dudjom) practitioners led by Golok Serta Rinpoche. In 1951, she gave birth to Lama Dawa in Muktinath, Mustang, Nepal, while doing the Nyensa Chö (Wyl. gnyan sa gcod) practice of performing the Chö feasts on the 108 charnel grounds. In India, in the early 1960’s and later, she received also many teachings from Dudjom Rinpoche. [1]