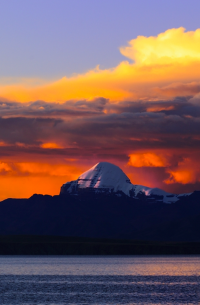 Namkha Khyung Dzong (Tib. ནམ་མཁའ་ཁྱུང་རྫོང་, Wyl. nam mkha' khyung rdzong) is the name of a Dudjom Tersar sub-tradition which was established by Degyal Rinpoche, a student of Dudjom Lingpa, on the slopes of and later around Mount Kailash.

Founded by Degyal Rinpoche in the 1910's

In the early 1900’s, and while being still in Golok, Degyal Rinpoche was asked by his teacher Dudjom Lingpa to soon travel to the Mount Kailash region, at the far Western part of Tibet. Then, Dudjom Lingpa passed away in 1904, and Degyal Rinpoche traveled with many students to Pemakö, where Dudjom Rinpoche was recognized in 1907 as an incarnation of Dudjom Lingpa. While arriving in the Mount Kailash region, Degyal Rinpoche began a series of closed retreats. Years later, disciples began to gather around him, and slowly the Namkha Khyung Dzong place was established. Over the years, this tradition became known as the Namkha Khyung Dzong Tradition.

According to Shiva Rinpoche, [1]

Dudjom Töluk is the Tibetan appellation for the Upper tradition of Dudjom Tersar. ‘Upper’ means ‘Western Tibet’ and more precisely the area of Mount Kailash. Why that? Because it is there that Degyal Rinpoche – one of the heart sons of Dudjom Lingpa, born in Golok (Eastern Tibet) and an emanation of Vairotsana – had settled to spend his life in meditation. His cave became a small hermitage called Namkha Khyung Dzong and this hermitage gathered many disciples from various places of Tibet and Himalaya in order to receive teachings each summer and to practice in retreat during winter.
The most famous disciple of Degyal Rinpoche was Golok Serta Rinpoche who came also from Golok. It is striking to know that he was considered as an emanation of Yudra Nyingpo who was in the 8th century the main disciple of Vairotsana. About the name of Namkha Khyung Dzong?
Outwardly, it refers to Degyal Rinpoche’s place and to his special lineage but inwardly, we can find signs of the true meaning in Dzogchen tantras and Longchenpa’s works: In the Lion's Perfect Expressive Power, one of the Seventeen Tantras of the Category of Pith Instructions, we can find the following verses:

In the sky [namkha] that is the true nature of phenomena, free of labels, soars the garuda [khyung] of awareness’s own manifestations, with none of what characterizes the objects of senses. It is uncontrived self-knowing awareness that is experienced as blissful.
Here Namkha refers to the empty essence of the primordially pure base, Khyung refers to the luminous nature which is spontaneously present and Dzong refers to the unceasing and all-pervading compassion which manifests as self-knowing awareness (rang rig). The inseparability of those three aspects of the base is Namkha Khyung Dzong. But Dzong is more especially explained in the self-commentary of Treasury of Dharmadhatu by Longchenpa, where awareness is timelessly fashioned as the “fortress” [dzong] of the vajra heart essence.

The major texts of the Namkha Khyung Dzong tradition are as follows:

Another important practice is a nyungné (Wyl. smyung gnas), a fasting practice based on Avalokiteshvara, which comes from the lineage of Jamgön Kongtrul Lodrö Tayé. This is the main practice for laypeople in the Namkha Khyung Dzong tradition.

Some of the main lineage holders and practitioners of the Namkha Khyung Dzong tradition are listed below:

Some of the main places of activity of the Namkha Khyung Dzong tradition are listed below.