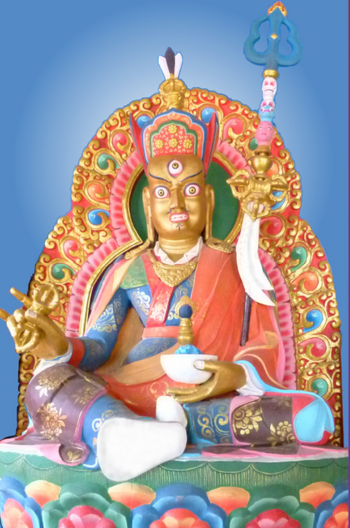 Image of Guru Rinpoche according to the Dechen Namrol practice, in Deden Tashi Chöling

The Dechen Namrol is similar to the Rigdzin Düpa of the Longchen Nyingtik but distinct from it as it is a more extensive lama practice sadhana which includes Tsok, Dharma Protectors, Tormas, and other practices.

In the Dechen Namrol, the central figure is Guru Rinpoche in the Nangsi Zilnön form, so not shown in union with a consort but single, with one foot and a vajra in his right hand. He has a more wrathful expression than other forms, and has a third eye blazing in his forehead.

As in the Tukdrup Yang Nying Kundü, Guru Rinpoche is surrounded by the Eight Manifestations of Guru Rinpoche, which is quite rare among the many lama sadhana termas of the nyingma tradition.

During the 19th century, the Dechen Namrol sadhana was first originally revealed by Dudjom Lingpa as a lama practice of his terma cycle the Zabsang Khandro Nyingtik ‘The Profound Doctrine of the Heart Essence of the Dakinis’.

In 1925, the practice was later rediscovered by Dudjom Rinpoche as a gongter at the age of nineteen, while he was in Kongpo Drasum in southern Tibet. Dudjom Rinpoche revealed this terma of his predecessor with modifications, adding many aspects to the sadhana, such as the visualization of mandala of the eight manifestations of Guru Rinpoche.

Dudjom Rinpoche combined the two termas into a comprehensive ‘Lama sadhana Rigdzin Düpa’, and at that time renamed it Dechen Namrol, ‘The Display of Great Exaltation’.

Tulku Orgyen Phuntsok said that “As this sadhana combines both termas, the blessings of both are ensured through practicing it”[1].

By Dudjom Lingpa in Golok

During the time of Dudjom Lingpa, in Golok, the Dechen Namrol was the main lama practice of the Dudjom Tersar, and the inner-most secret form lama sadhana. The practice was then called ‘The Excellent Treasure Vase of Siddhis’.

Later, when the community moved to Lower Pemakö (the India side) and founded Deden Tashi Chöling, Dudjom Rinpoche appointed one of his heart disciples, Togden Kunzang Longrol as the head of the nagkpa sangha. And since then, the Rigdzin Düpa Dechen Namrol sadhana has remained a constant practice at this place both as a monthly tsok practice, but also as part of the Three Roots accumulations.

By Tulku Orgyen P'huntsok in the West