Gadé (Tib. དགའ་བདེ་, Wyl. dga’ bde), aka Gadé County (Tib. དགའ་བདེ་རྫོང, Wyl. dga’ bde rdzong, Chin. Gāndé Xiàn甘德县) is a county division of Golok. Located in the southeast of Qinghai Province, China, it is bordering Gansu to the east. It is under the administration of Golog Tibetan Autonomous Prefecture. It is an important breeding area for the black-necked crane. [1], [2] 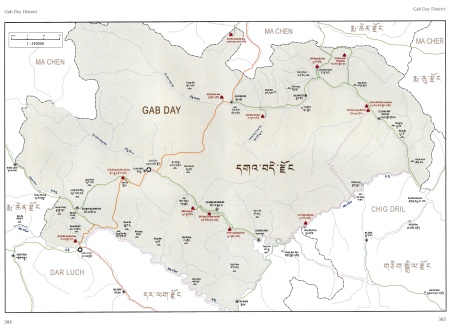 Map of Gadé, courtesy of Stewart Smith, The Monasteries of Amdo, Volume 1: East and South Amdo, 2017.

The main mountains of Gadé county are the following:

Gadé County has an average annual temperature of -2°C and annual precipitation of 550 mm. It is windy all year round, the average wind speed is of 2.2 m/s. There are many days with strong wind, approximately 69 days annually, wind is above level 8, and mostly paroxysmal, especially in winter and spring. In summer and autumn, wind tends to be softer.

The main cities of Gadé county are the following: 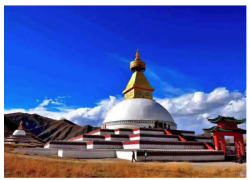 The main tradition lineages practised in Gadé are related to:

The largest number of Buddhist institutions in Gadé pertains to the Jonang tradition. A very unusual occurrence is the existence of two monasteries that are Nyingma and Geluk at the same time.

Tibetans in Gadé County mostly wear the traditional chuba made of sheepskin material. Men’s dresses go down to their knees, while women’s dresses reach to their feet, and are tied at the waist with long belts made from. Both men and women of Gadé have their long hair braided or open. People like to wear knives, waist knives, and bullet bags. [16]