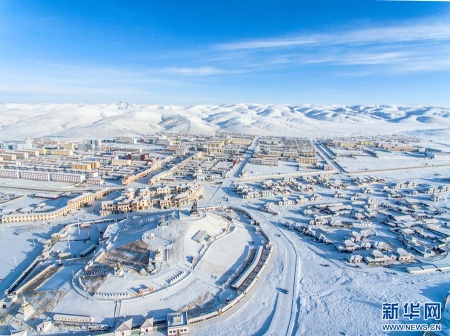 Located in southeast-central Qinghai province, bordering Sichuan to the south, its area is about 25,000 km2 (9,700 sq mi). With an elevation of about 4,300 m (14,000 ft) it is the highest Chinese county by average elevation. In Matö County is the upper stream of the Ma Chu (Yellow River) which flows to Ngoring Tso and Gyaring Tso lakes. [2][3].

Matö is a high plain area with terrain slopes from northwest to southeast. With altitude between 4500-5000 meters, the terrain is relatively flat, with height differences of 500-1000 meters. The county’s northwest is higher, and its southeast is lower. Between mountains, are desert plains and marshland.[5][6]

With an elevation of around 4,300 m (14,000 ft), Matö has an alpine climate (Köppen EH), with long, bitterly cold and very dry winters, and brief rainy cool summers. Average low temperatures are below freezing from early September to mid-June; however, due to the wide diurnal temperature variation, average highs are only below freezing from early November thru mid-March. Despite frequent rain during summer, when a majority of days sees rain, no month has less than 50% of possible sunshine; with monthly percent possible sunshine ranging from 53% in June to 79% in November, the county seat receives 2,838 hours of bright sunshine annually. The monthly 24-hour average temperature ranges from −15.7 °C in January to 8.0 °C in July, while the annual mean is −3.33 °C, making the county seat one of the coldest locales nationwide in terms of annual mean temperature. Nearly three-fourths of the annual precipitation of 332 mm is delivered from June to September.[7] 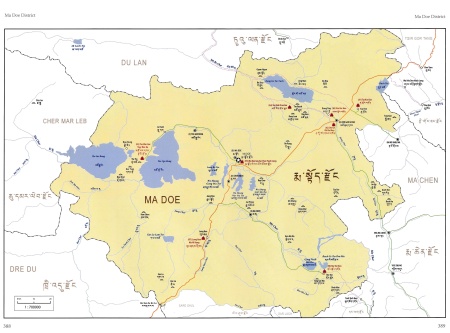 Map of Matö, courtesy of Stewart Smith, The Monasteries of Amdo, Volume 1: East and South Amdo, 2017.

Matö is a county of many lakes, sometimes numbered to be more than 4000, from which its most important rivers spring. In the western part, the tow largest lakes are the Tso Kyaring (Tib. མཚོ་སྐྱ་རིང་, Wyl. mtsho skya ring) and the Tso Ngoring (Tib. མཚོ་སྔོ་རིང་, Wyl. mtsho sngo ring). In the eastern part, there are the Tongi Tso Nak (Tib. སྟོང་གི་མཚོ་ནག་, Wyl. stong gi mtsho nag), the Dugtso (Tib. དུག་མཚོ་, Wyl. dug mtsho), the three Washung Lakes (Tib. ཝ་གཞུང་མཚོ་གསུམ་, Wyl. wa gzhung mtsho gsum) and the Gang Nakma Tso (Tib. སྒང་ནགས་མ་མཚོ་, Wyl. sgang nags ma mtsho). There is a bird sanctuary at the southwest corner of Tso Kyaring, where swans, gulls, wild geese and ducks can be seen nesting. The two major lakes provide fishing grounds for Chinese immigrants, Tibetans on the other hand, tend to avoid eating fish.[9][10]

Located in the southwest of Matö County, Bayankhala range, ‘Fertile Black Mountai’ in Mongolian or Gyalla,’Gorgeous Mountain’, in Tibetan, extends 780 kilometres east from Kunlun Mountain, and is regarded as the southern branch of this mountain. Bayan Har Pass is located in the middle of this mountain range. Since ancient times, it has been the main road to connect Xining and Yushu.[11]

The main cities of Matö county are the following:

All of the monasteries in Matö follow the Nyingma tradition.