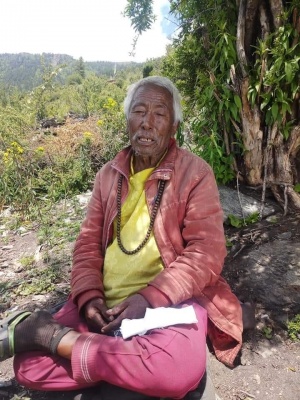 Lama Pema was born in 1940 as a son of Jorke (father) and Tenzima (mother), in the village of Khagalgaon, in Humla District, Nepal.

He took refuge with Golok Serta Rinpoche who, when he cut Lama Pema’s hair, named him Pema Khyenrap (Wyl. pad+ma mkhyen rab). It is said that when this was done, the moon rose.[1]. Around the age of 15, in the early 1950’s, Lama Pema became a close student of Golok Serta Rinpoche, Second Degyal Rinpoche, Tsokhang Choktrul Tsewang Dorje, and of Shiva Rinpoche. From them, he received many empowerments and [[lung]s which include Tröma Nakmo (Dudjom), and the Dorje Drollö practices of the Dudjom Tersar tradition.

From Yangthang Rinpoche, Lama Pema received many empowerments from the Longchen Nyingtik cycle. From Tulku Pema Rigtsal, he received teachings and explanations on Neluk Rangjung and Sherik Dorje Nӧnpo Gyü. From Gyepa Rinpoche and Shiva Rinpoche, he received many Dzogchen instructions.

Until recently, Lama Pema was the most senior and exemplary student of Second Degyal Rinpoche.

More than 55 years in retreat

Lama Pema and Lama Rigdrol were the first two lamas in Humla (in Lathok) to stay in a three-years retreat under the guidance of Second Degyal Rinpoche. Since then, and following in their footsteps, there have been many other students staying in three-years retreat, six years or life-long retreats in the region of Humla. Starting at the age of 22 (in 1962), Lama Pema remained in strict retreat for all his life for more than 55 years. During those times, he faced numerous difficulties such as sometimes surviving only on potatoes, but he was always steadfast in his devotion to his practice, and never once left his retreat.

A life of simplicity

Lama Pema led the simplest possible life. His hermitage consisted of a cup, a bowl, his Tröma Nakmo implements (damaru, bell and kangling), and some important Tröma Nakmo and Dzogchen prayers books.

On March 7th, 2021, Lama Pema passed away. He stayed in Thukdam for several days. During that time, some unusual signs appeared, like drops of milk appearing from his nose. [2]