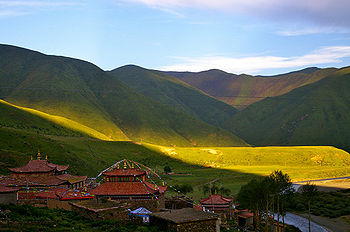 Mardo Tashi Choling Monastery is located in the Golok region of Amdo, Eastern Tibet. Built more than two hundred years ago, it is one of the four main branch monasteries of Katok Monastery, the oldest of the six 'mother' monasteries of the Nyingma. Mardo Tashi Chöling was the home of the great tertön Dudjom Lingpa (1835-1904) and of the succession of reincarnations of Katok Dampa Rinpoche, starting with Gonpa Lama Chökyi Dorje.

At age 25, from among rocks in the Mar Valley, around Mardo Tashi Chöling, Dudjom Lingpa revealed a prophetic guide (khajang): the detailed instructions on how and when he should reveal his own terma. In his biography, Dudjom Lingpa recounts: [1]

In the last spring month, I prepared to build a house on top of Puklung Gékyi Latok. During that time, at night on the tenth day, an eldery woman appeared saying she was Dakinbi Kuntu Gyuwa Rikdenma, Noblewoman Who Travels Everywhere. She counseled me,

Sublime being, listen to me!
On the third day of the middle autumn month
The stars and planets will be well aligned for building your home.
Until that time,
The time isn’t right for construction?
Until then, stay here!
Neither good nor bad circumstances will arise.

When the third day arrived of the first autumn month, I assembled scores of workers and we went about laying the foundation for my home. While we dug the foundation for the Dharma Protectors temple, we found a trio of precious gold, turquoise, and conch, a trio of copper, silver, and iron, as well as agate, rubies, lapis, coral, and more. Some jewels we could identify and some we didn’t recognize. Their sum overflowed from a small trough. I understood this to be an auspicious connection indicating the increase of our merit and wealth.
Under the foundation for the storehouse we found three human skeletons of different sizes and pearl garlands strung together with copper wire. Although the interdependent indications for the protector temple were excellent, it wasn’t in line with the edge fo the house. Since this wasn’t good, I didn’t build it there.
When the house was complete, a mad monk arrived. To examine the portents, I ordered him, “Go to the Mar River, find an unusual stone, and bring it back to me.” He left and returned that night carrying a maroon river stone shaped like a human ear.
My students asked, “What sort of portent is that?”
I told them, “This is a sure sign that I won’t be able to stay here very long: One hears with the eat, so I must go to a far-off place.”
On the third day of the first winter month, a yellow girl appeared in space before me. Saying she was Dakini Lékyi Ché, Supreme Queen of Activity, she told me, This month, from the tenth day until the fifteenth day, perform numerous vajra feasts and make offerings, and this monastery will be a Buddhist center for two generations. Although you don’t have the fortune to stay here for very long, what you’ve done will not become meaning less. It has some purpose Then she vanished. Just as she advised me, I made extensive tsok and Fulfilment offerings based on the Dorje Drolö practice from Rigdzin Düddul Dorje’s terma called Heart Essence of the Manifest Embodiment’

In his outer autobiography, Dudjom Lingpa recounts how in 1891, at 56 years old, he was told by Dakini Yeshe Wangdenma to go back to Mardo Tashi Chilling Monastery[2]:

At Tashi Gakyil in Mardo,
Temporarily form a Buddhist center and stay there.
As in your previous illusory dramatic enactments,
This moving of your residence is a result of auspicious connections.
Aware of that, think about the meaning [of those signs]..

During the unrest in Tibet, the entire monastery was destroyed. Today much of the monastery has been restored, such as two temples and a residential space for 160 monks.